The Uganda Civil Aviation Authority (CAA) is on the spotlight after it has emerged that that authority is recruiting staff without following  clear procedures.

The latest is that CAA has recruited many young people but using underhand methods and  majority of these being from sons and daughters of politicians. Among the politician’s son to have applied for the CAA jobs is Tony Rwamirama, an alleged son to State Minister for Veteran Affairs Bright Rwamirama.

Sources at Entebbe also told this Website that due improper planning, majority of the recruits are lacking office space hence forced to work in the canteens.

“I am very pleased to inform you that you have been offered a contract of employment as Assistant Marketing Officer,” reads an appointment letter addressed to Rwamirama a copy of which Eagle Online has accessed.

“The following specific terms will apply to you: Tenure – One year contract effective when you take up your duties as Assistant Marketing Officer; you will be paid a consolidated salary of Ushs.3, 000,400 per month. As will be provided by the manager marketing.”

The body will also cater for his hospital costs once sick and he will also be provided with transport.

“Upon acceptance of the terms set out in this contract, please affix your signature on the Certificate of Acceptance which shall form part of this contract and return the contract to the undersigned, within one week from the date of this contract,” reads the letter which has been signed by the Director Human Resource & Administration, Fred K. Bamwesigye.
Rwamirama has been handed a deal at CAA. 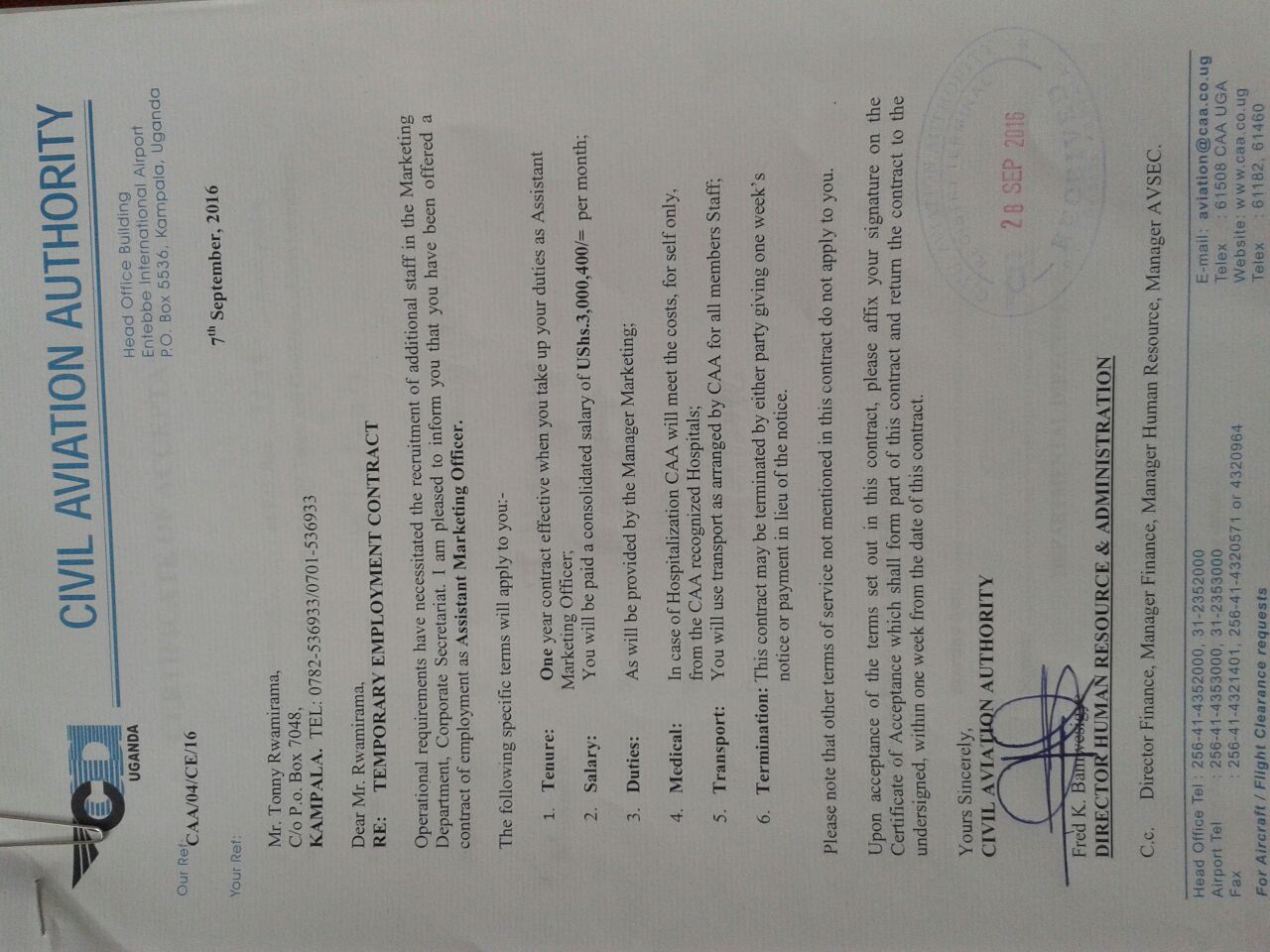 However, EagleOnline is reliably informed that whereas the body advertised for vacant positions, the jobs had been already dashed out to children of prominent politicians.

As the Airport and Aviation regulator is recruiting, its staff are also up in arms as why the board and management have not cared to increase their salaries but what is hurting them is the underlying factor that most works are about to be sent off.

“We don’t know our fate because many departments had reached the seal but we are shocked that management decided to recruit new people while at same time old staff members have not been considered in the new salary scale. You find an old person who has worked for close to 10 and above years earning peanuts and yet newcomers are be paid well but at the same time when we beat them in qualification and experience” said a long serving CAA official.

According to the appointment letter issued to Rwamirama, he is to earn Shs3 million but some insiders say, despite the petition to the Inspector General of Government (IGG) on the same matter, little has been done as both Human Resource & Administration, Mr. Fred K. Bamwesigye and         Managing Director Dr. Rama Makuza continue threatening them.