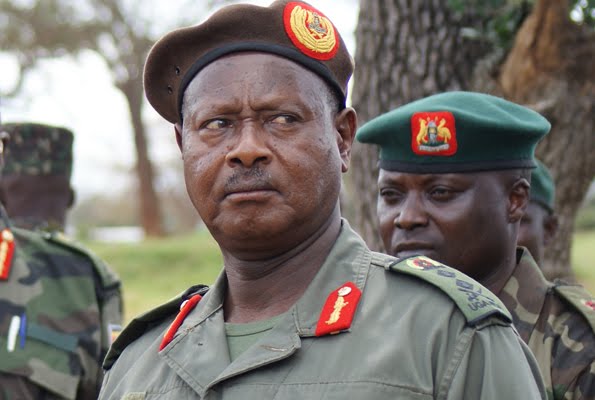 President Yoweri Museveni who is also the commander in Chief of armed forces has summoned an emergency UPDF High Command meeting over the fake arms deal involving some of his top generals.

EagleOnline has reliable learnt that Gen. Museveni is incensed by the reports that some of the top army generals are involved in a fake procurement scandal that left Polish nationals robbed of over 500,000 Euros.

“With the bad image the army is getting of late, the Commander in Chief has called for the meeting on Monday at State House Entebbe” a source said. The UPDF High Command consists of service chiefs, division commanders, brigade and battalion commanders, and our sources say that the President has already obtained the report about the whole transaction and is going to brief the High Command before taking a decision.

Further, the sources added that the ‘unclear decision’ to secretly transfer the Deputy Director of Chieftaincy of Military Intelligence Colonel Herbert Mbonye to Somalia as Senior Intelligence Officer is reported to have irked the Commander in Chief.

Col. Mbonye, who was investigating the arms saga, was secretly transferred to Somalia and yet any transfer, promotion or demotion of all men and officers of the army must be done in consultation with the CIC.

The Polish arms firm was allegedly contacted by Uganda Peoples’ Defence Forces (UPDF) , under the guise that the army needed armour, tanks and surveillance vehicles.

It is said that later, the Polish nationals were invited to come to Uganda and were reportedly taken to the fortified Bombo army barracks where they signed a fake deal.

Interestingly, according top sources, the matter had never been discussed by the UPDF High Command or any relevant organ of the army. However, a fake 12 million Euros contract was later signed before the Polish suppliers were told to release 500,000 Euros.

In September last year, conmen disguising as Ministry of Defence procurement team invited officials of the Irish BMP Poland SP Z.o.o for meeting in Bombo, the headquarters of Land Forces.

The organisers, some of them dressed in military uniform, assured top managers of the Polish company that government was planning to procure a big cache of weapons in a deal worth Euros 71 million.

After the meeting, the Poles came out of the meeting contented, knowing they would get the deal and were to pay Euros 7,000 for bidding documents.

Sam Ssimbwa, the alleged lead negotiator, who said was using his company Prima Investments Uganda, later assured the Poles that he was going to negotiate for them to get the deal.

“We have tried to recover the amount of security bond from Equity but the money remaining on Prima bank account is not enough. The money was withdrawn,” says Celer Marek, the Chief Executive Officer of BMP Poland SP .Z.o.o

More money was wired to Prima Investments Uganda’s account through Equity Bank as consultancy fee. However, after receiving the money, the receipients switched off their phones and were not replying messages from BMP Poland SP. Z.o.o.

Later one, of the suspects was arrested and he accused the Chief of Staff Land Forces Brig Leopold Kyanda of being the mastermind of the quack deal.

It’s said that Mr Ssimbwa, who drives expensive Range Rover in town, was released by one Mark Odong from Kireka Special Investigations Unit (SIU) on the orders of Brig Kyanda.

However, Brig. Kyanda through Army Spokesperson, Lt. Col. Paddy Ankunda told the media that he is not knowledgeable about Ssimbwa and Prima Investments.

However, EagleOnline could not ascertain this account of events but we were also able to learn that whereas Brig. Kyanda’s name is brought in by other sources, we also established Kyanda could be a target of a powerful army general who reportedly sees him as a threat to his post.