The African Union Mission in Somalia (AMISOM) has commended its female peacekeepers for their critical role in the restoration of peace and stability in Somalia after decades of war.

The recognition was made during the female peacekeepers conference, held in Somali capital, Mogadishu, and attended by officers from all components of AMISOM including the military, police and civilian.

Speaking on behalf of female peacekeepers, Ugandan AMISOM Deputy Police Commissioner, Christine Alalo, said female officers had sacrificed a lot in the stabilization process of Somalia, despite the numerous challenges they faced.

“Like their male counterparts, they have fought at the frontline, they have operated big guns like artillery to fight the enemy, they are commanders of their troops and contingents, and they have gathered intelligence, enabling operations. The women are building the capacity of the local security to enable them handle the security of their country. Some are in administration and in the leadership of the mission to ensure that the mandate of the mission is achieved,” Ms. Alalo stated.

The Special Representative of the African Union Commission Chairperson (SRCC) for Somalia, Ambassador Francisco Madeira, thanked the female peacekeepers for the courage they have exhibited in their duties and enhancing the mission’s ability to execute its mandate.

Ambassador Madeira said female officers were an inspiration to many women, especially in their host communities, adding that they had played a role in encouraging Somali women to be active in the affairs of the country.

He further underscored the importance of having women at the forefront in the fight against terrorism, adding that full restoration of social-economic activities was also an urgent priority for Somalia if the country is to register development. 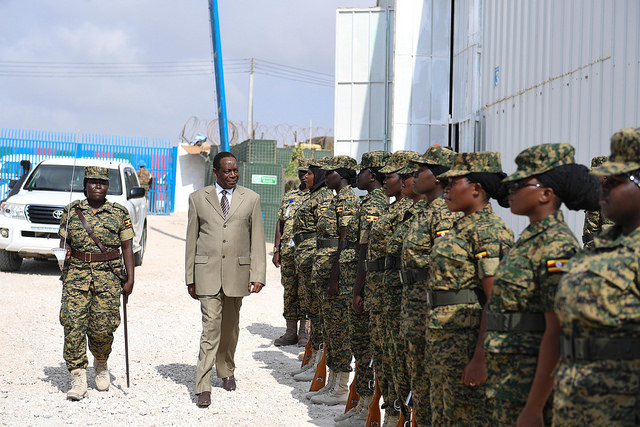 “Those who impede trade from taking place, those who restrict the movement of our citizens when they want to go to the shamba (farm), the market or take children to school. Those who are impeding these activities are restraining development. You have understood this and you have decided to enlist yourselves to come and confront this challenge. I salute you for your courageous decision and for the work you are doing in all the six sectors,” the SRCC said.

The representatives of the Somali Police Force described the conference as fruitful, saying it had provided female officers a platform to share experiences.

“I am always delighted when I come to a room full of women in uniform, and today we were specifically celebrating AMISOM peacekeepers. We were very delighted as Somali Police officers to be invited, to join them so that we can share our experiences and best practices,” said Captain Idil A. Hassan, the Head of the Gender Unit in the Somali Police Force (SPF).

AMISOM has a total of 657 women serving in various capacities in the mission. The leadership of AMISOM is advocating for more female peacekeepers, given the special contribution they have made in stabilizing Somalia and also encourage women participation in the affairs of the country.

The conference also discussed the achievements of the female peacekeepers, the challenges they face and ways of addressing them. Participants at the meeting thanked AMISOM for organising the conference and providing them a platform to not only share experiences but also get their voices heard.

AMISOM Military Gender Officer Major Bupe Chanda summed up the sentiments saying; “the conference will help female keepers, because they will have a sense of recognition. From what has been discussed with the female peacekeepers; they now feel recognised and appreciated in this mission.”