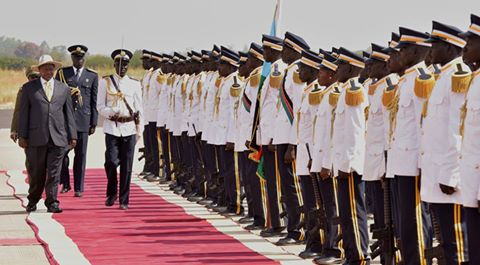 The visit of the President Museveni to the war torn country was unannounced. Both Kampala and Juba did not make any statement. On arrival at Juba Airport,Gen. Museveni  was immediate driven to Plot 1 Juba  for talks with Kiir.

Museveni remains a regional key ally to the troubled Kiir whose government is embroiled in an internal disintegration between his forces and the those of the First former Vice President, Dr. Riek Macha who fail out with the Juba regime.

Museveni’s journey remains unclear on what the two leaders discussed behind the door.   South Sudan Presidential Press Secretary, Ateny Wek Ateny told reporters on Thursday that discussions between the leaders were based on bilateral relations and the upcoming UN Security Council   vote on arms embargo due to take place on Friday.

However, Don Innocent Wanyama, President Museveni’s Senior Presidential Press Secretary told EagleOnline that President Museveni was today, on the invitation of Salva Kiir, undertaken an official visit to Juba. The two leaders held bilateral talks on issues of mutual interest to their countries.

On the political situation in South Sudan, President Museveni advised that all warring parties should lay down arms and seek political authority through the ballot.

“My prayer is for the people of South Sudan to regain sovereignty through the vote. The fighting should stop and allow the people to regain their power which currently is with those with guns,” said President Museveni.