Joel Kamadhi arrived early enough, just to take up a seat next to Gaudensia Mbaroraburora aka Club Belle. As usual, Kamadhi looked every inch the naughty man he is, touching Club Belle in a manner suggesting he was up to some mischief. In fact, the ‘house’ was full, given that all the 43 members had gathered to ‘share the end of year party’, a ritualistic get together usually held in the first week of a new year for members to celebrate and also reflect on the group’s ‘successes’ in the past year. At the end of the fete, the members then share out money, far less than Shs6 billion, which the group saved in the last year, according to one’s contribution.

“Since the year ended about three weeks ago, I want to suggest that the group reviews the past year and also a few developments that have taken place in the last two weeks since the year began,” Kamadhi said, looking cynically at Joseph Lakony P’Orach, Hitler Eregu and Yorokamu Bwambale who were engaged in another conversation altogether with the other members. But perhaps what he did not foresee, and which was of import to note is that this time round the group had been joined by its two leading academics, controversial city lawyer Rebecca Kagada aka Rebecca K and ‘Insect Professor’ Maurice Ladit Ogeng, both of who warned Kamadhi to have his ‘facts ready for today’s steamy session’.

“It has been discovered that during our absence you tend to concoct a lot of stories, telling the group members about issues you cannot substantiate. So today since we are here, expect fireworks,” lawyer Rebecca K started off with a seemingly stern notice to Kamadhi.

“You said you worked for government for almost 40 years and even claimed that you are a cadre of the Movement, whatever that means,” Ladit Ogeng serenaded Kamadhi, in support of lawyer Rebecca K.

Professor Ogeng added: “Today we are here not to joke about; we have an important annual ritual to carry out; that of selecting the group’s ‘Best Ugandan Employee of the Year’.

And, as if in self-defence, a now seemingly cowed Kamadhi denied he had ever told the group any lies since he joined two months ago, insisting that he was always ‘misunderstood’. Meanwhile, the attack on Kamadhi by lawyer Rebecca K and Prof. Ladit Ogeng had sent Bwambale, Eregu, Lakony P’Orach and the other members into uncontrolled laughter, seeing as it is that Kamadhi usually likes riding roughshod over them.

Intriguingly, after being satisfied that Kamadhi had been ‘reduced to size’, the Chairman Richard Akalyamaggwa Bonnabagagawale aka ‘Sir Rich’ then called the ‘house’ to order, asking Lakony P’Orach to ‘set the ball rolling’.

“Please, listen to me carefully,” Lakony P’Orach begged the members before ‘tabling recent issues’ he said had had great impact on the country.

“As Bwambale will tell, in November last year his King’s palace was attacked and the King himself arrested but the country is moving on. Then, it emerged that 43 patriotic Ugandans, some of the most highly paid people in the country, beseeched the President to ‘gift’ them billions of shillings because they had helped save Uganda a loss of US$434 million. The praises from all quarters are reverberating,” Lakony P’Orach said, before pausing for effect.

Soft-spoken Bwambale joined him, telling members that ‘all was okay’ and reminding them that his King had applied for bail at a time when his mother, wife and brothers were signing a ‘peace pact’ with government, meaning that they had taken responsibility for all the messy things that happened in Kasese.

“I think that was an indictment against the other members of the royal family; can you believe that even one of them is a cabinet minister who, it is thought, is supposed to know implication of their actions?” Bwambale asked, before suggesting that “the five go to Luzira and the King be released.”

“Ladies and Gentlemen, I was still telling you about the government officials and the billions; there are murmurs that those patriotic Ugandans lied about their actual roles but I don’t see a chance that they over-hyped their role in ‘saving’ the billions for Uganda, seeing as it is that a foreign firm was also paid tens of billions to do the same work,” he said. “I think that is why they are not even afraid of an investigation announced by the Speaker of Parliament Rebecca Kadaga,” Lakony P’Orach added.

Then Chairman ‘Sir Rich’ Bonnabagagawale sought the members’ attention, to introduce ‘an annual club practice’; that of voting for the ‘Best Ugandan Employee of the Year’, a preserve for those public servants who have exhibited the worst ethical conduct while in pursuit of their duties. The Chairman then called for suggestions. 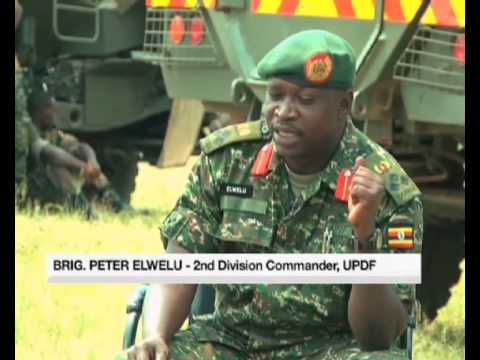 “Brigadier Peter Elwelu,” Hitler Eregu, the former rebel-turned-ruling party cohort from Teso shot up, supported by the emotionally overwhelmed Yorokamu Bwambale. The two were, however, overruled by Chairman ‘Sir Rich’ Bonnabagagawale, who advised that traditionally soldiers are not part of the group’s evaluation of public servants. “Any other suggestions?” The Chairman asked. This prompted Kamadhi to come to the fore, mentioning six names of the officials who, among several others, shared between them 6 billion shillings after  they had saved Uganda by ‘winning’ a Capital Gains Tax (CGT) case involving US$434 million against two oil prospecting companies, Heritage Oil and Gas and Tullow Oil.

“I propose we debate the following names of the outstanding patriotic Ugandans before zeroing in on the best among them: Deputy Chief Justice and Court of Appeal Judge Justice Steven Kavuma; Uganda Revenue Authority Commissioner General Doris Akol; Finance and Economic Planning Permanent Secretary and Secretary to Treasury (MoFEP PS/ST) Keith Muhakanizi; former Attorney General Peter Nyombi, former URA CG Allen Kagina and the KCCA Executive Director Jennifer Musisi, in no particular order; nominations closed,” Kamadhi braggingly declared, before asking lawyer Rebecca K and ‘Insect Professor’ whether they had any objections to his ‘list of candidates’.

First to respond to the challenge was lawyer Rebecca K, who supported Kamadhi, albeit with an amendment. “I wholly agree with the names you have suggested, however, you should have mentioned all the 43 public servants and then enjoined Justice Kavuma to the list. That way the group would acquit itself better against accusations of having selective memories. But still my choice for overall winner is Justice Kavuma who, I think was justified in issuing the restraining order against Parliament or any other sections from debating what has now come to be known as the ‘cash bonanza,” lawyer Rebecca K said. And, weighing her words carefully, she added: “You see I have a Masters Degree in law, obtained from Zimbabwe University, an ‘African Ivy League’ university in the 1980s before Zimbabwe went to the dogs; Anyway, I don’t know whether the learned Judge also has a Masters, but surely his ruling was superb, to say the least! And to understand my stance better, you have to read a statement released by the Uganda Law Society regarding the matter; the law society pronounced itself on a public interest matter, an issue to which which Justice Kavuma paid due attention to before issuing the restraining order to Parliament.”

“I also hear he wants to reduce his age and has sworn an affidavit indicating he is four years younger than originally declared; he should be allowed so the country continues to benefit from extraordinary judicial decisions,” lawyer Rebecca K said and added. “Also, we need to highly extol the others like Muhakanizi just like we do with Ugandan pensioners, seeing as it is that the finance PS ensures that they get their pension money intact and on time, just like he ensured the oil cash got onto the beneficiaries’ accounts in record time.”

After her submission, Prof Ladit Ogeng also shot up, first on a ‘point of order’. “Mr Kamadhi, I would first of all like to correct you; I am not an ‘insect professor’, the correct title is Entomologist. Having said that, I want to agree with you and the immediate pre-current speaker,” Prof Ogeng roared, reminding the members that his English was ‘fine-tuned’ after being spotted as a ‘good debater’ by teachers during his high school days at Layibi College in Gulu.

He added: “I also think Justice Kavuma deserves the overall winner’s plaque, but for purposes of recognition, we should also nominate ‘the Executive’ which gave a green light for the money to be shared out. Surely, the Executive should be recognized for rewarding people for hard tasks well executed!” Prof Ogeng volunteered.

After heated debate and hearing from lawyer Rebecca K and Prof Ladit Ogeng, the two most educated members of the group, Chairman Akalyamaggwa Bonnabagagawale put the matter to a vote, by show of hands.

And, by acclamation members voted Justice Steven Kavuma as the ‘overall winner of the Mutungo Malwa Club Best Ugandan Employee of the Year’ award, something that was followed by huge celebrations.

Anyway, after the vote Chairman Bonnabagagawale declared the dance ‘open’, and lawyer Rebecca K and ‘insect professor’ Ladit Ogeng took to the floor, dancing the paka chini style to the Congolese music, to the amusement of the members, who demanded they also be paid their ‘share of savings’.

The chairman decreed as such, and members were paid, with the biggest beneficiary from the group getting Shs262.000, one hundred times less than what the biggest patriotic beneficiary in the cash bonanza got.

All of us then hatched plans to retreat to our places of abode, but this was not before lawyer Rebecaa K and ‘Insect Professor’ Ladit Ogeng contesting how the ‘club dividends’ were arrived at.

The two accused Chairman Bonnabagagawale of favouritism, arguing that they should at least have gotten more than what the patriotic Ugandans got.

The party then came to an unceremonious end, with no one wishing the other ‘goodnight’. In short, club members, mostly lawyer Rebecca K and ‘Insect Professor’ Ladit Ogeng, were left disgruntled and divided over a topic that usually unites them at the beginning of every New Year.

This is a burlesque column that runs every Friday.