Two senior judges and two city law firms are embroiled in a rift, with one of them said to have solicited for a bribe to enable six people he sentenced to death for murder to access records of the proceedings in order to be able to appeal the sentence. 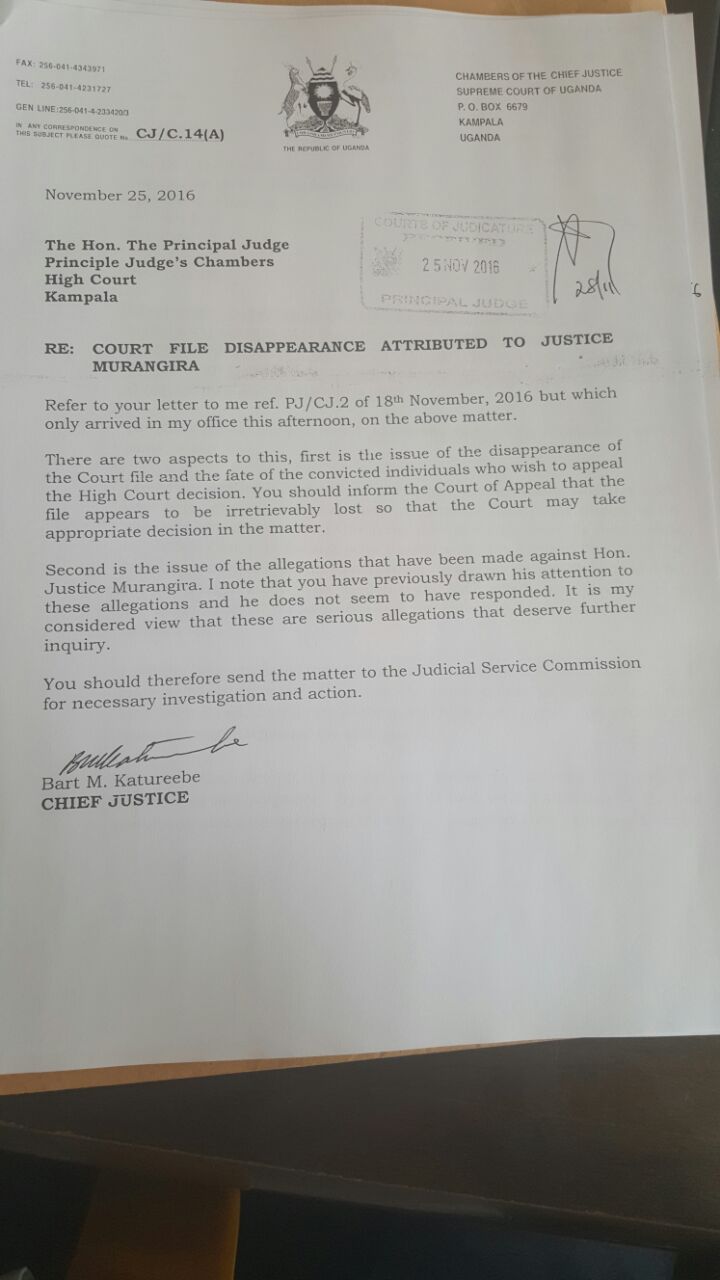 The Chief Justice’s letter to the PJ

The rift that has also drawn in the Chief Justice Bart Katureebe involves Principal Judge Yorokamu Bamwine, lawyers from the law firm Munungu, Mushabe and Company Advocates and city lawyer Frank Kanduho of Kanduho and Company Advocates on one side, and Justice Joseph Murangira of the High Court, on the opposite side. 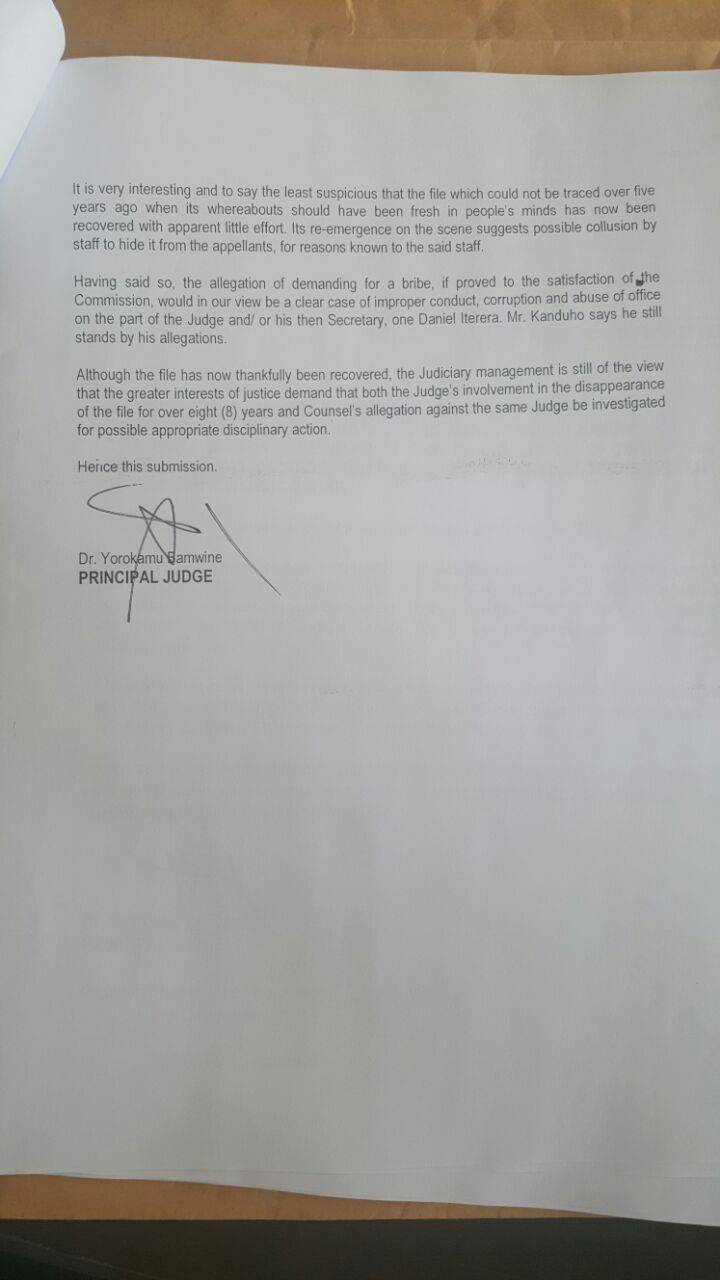 According to a November 28, 2016, referenced PA/JA.17 letter by Principal Judge Bamwine to the Judicial Service Commission (JSC) Justice Murangira was accused by the lawyers from Munungu, Mushabe and Company Advocates and lawyer Kanduho, of being behind the initial disappearance and subsequent re-surfacing in 2016 of the records of proceedings, judgments and file in criminal case No.102 of 2005 against Moses Byansi, Jackson Kashaija, Misaki Tumuhairwe, Nathan Kirungi, George Lwali and John Rurungulu, and soliciting an unspecified bribe to enable the convicts access the court records.

At the time the six, who were sentenced in 2008, were represented by Munungu, Mushabe and Company Advocates and in the letter PJ Bamwine says lawyer Kanduho of Ms Kanduho and Company Advocates, refused to act as a conduit to transmit the said bribe to Justice Murangira, a development that prompted the PJ to write to Justice Murangira seeking clarification.

‘In July 2011 my office received a complaint from Munungu, Mushabe and Company Advocates dated 14th July 2011, in which they indicated their clients were convicted of murder and sentenced to death by Hon. Justice Murangira who had since denied them certified copy of the proceedings and judgment’.

Apparently, in replying the PJ’s letter, Justice Murangira refused to respond to the accusations by Kanduho.

‘I make reference to the above matter and to your letter of 25th November 2016. I am happy that the file has re-surfaced. Even then its recovery after eight years gives no credit to the judiciary. Coupled with Counsel Kanduho’s assertions that the file disappeared after refusing to succumb to your demand for a bribe in the matter, we are left with no option but refer the matter to the Judicial Service Commission for investigation and possible administrative action’ the PJ wrote and attached Kanduho’s letters dated August 17 and November 14 last year.

‘Since in the letter under reference you have opted not to comment on the said Counsel’s serious allegations, you may be pleased to offer the same to the Judicial Service Commission, if so invited, copy to me for records purpose only,’ the PJ added.

In the same letter the PJ also said Justice Murangira had been accused of complicity in the disappearance of records of proceedings in criminal case No.120 of 2006 against a one Joseph Ekusai.

Earlier on November 25, CJ Katureebe had written to Justice Bamwine, offering advice and guidance on how to proceed with the matter, which the PJ had raised in a November 18 letter.

‘There are two aspects to this, first is the issue of the disappearance of the court file and the fate of the convicted individuals who want to appeal the High Court decision,’ the CJ wrote.

‘Second is the issue of allegations that have been made against the Hon. Justice Murangira. I note you have previously drawn his attention to these allegations and he does not seem to have responded. It is my considered view that these are serious allegations that deserve further inquiry,’ the CJ wrote in response to the Principal Judge’s letter of November 18.

By press time it was not possible to establish what options the JSC would pursue in regard to the matter.