As the search for a new Makerere University Vice Chancellor begins in earnest, the incumbent VC Professor John Ddumba Sentamu has taken on his deputy, Prof. Barnabas Nawangwe, writing a disparaging ‘caution’ letter and, making accusations of insubordination, ridicule and ‘financial irregularities’ against the latter.

The university is supposed to kick start on the search process of recruiting a new VC to replace Ddumba and it is rumoured that Nawangwe is among those to contest for the post.

In the letter dated Monday, January 30, addressed to Prof. Nawangwe, the VC, quoting sections of the Universities and Other Tertiary Institutions Act (UOTIA), accuses his deputy and the University Secretary Charles Barugahare, for among other miscreant acts, colluding against him while in execution of their duties.

Saying the Prof. Nawangwe and Mr. Barugahare had kept him in the dark about their activities before the closure of the university that was ordered by President Yoweri Museveni in October last year, Prof. Ddumba makes a raft of allegations against the DVC Finance and Administration among them ‘irregular financial transactions’, and then advises his deputy to ‘read carefully’ Part VIII Section 31 (1) (a) of UOTIA.

‘You are (also) aware that on a number of occasions, you have made derogatory verbal utterances and disparagingly shouted at me in management meetings. This exhibits gross misconduct and disrespect on your part,’ the VC wrote in the five-page letter that is also copied to the Chairman Makerere University Council Dr. Charles Wana-Etyem and the members of Makerere University Management. In the letter the VC also accused his deputy of ‘questioning’ his powers, and also for arrogating himself powers to make decisions among them ‘irregular’ monies paid to security officers at the university.

‘On 20th October 2016, as the Chief Executive of this University, I wrote to the University Secretary (the Accounting Officer) on the subject of utilization of the presidential initiative project funds seeking clarification on the criteria used to inform disbursement of funds. This was after observing that funds were being used for travels and conferences. To my surprise, the response was made by you, when in the first place, you were not the addressee. In your letter of 25th October 2015 you question my sense of judgment and prudence in seeking clarification from the Accounting Officer over the utilization of presidential project funds’!

However, in response to the letter, Prof. Nawangwe wrote to Council Chairman Dr. Wana-Etyem on February 2, pointing out the loopholes in the VC’s assertions and detailing his responsibilities as Deputy VC. To that end the DVC quoted some sections of UOTIA that he said had been ‘conveniently avoided’ by the VC in his letter, and these included but are not limited to making decisions as DVC (F&A) which, inter alia, provide that he reports to Council.

‘Sir, before I proceed any further, allow me elucidate the role of the Deputy Vice Chancellor (Finance and Administration) and that of the University Secretary as provided in the Universities and Other Tertiaries Institutions Act (2001) as amended, which Prof. Ddumba conveniently avoids while trying to point out the role of the Vice Chancellor in his defamatory letter,’ Prof. Nawangwe wrote in his 4-page letter copied to the VC and university management.

Below is Prof. Ddumba’s letter to Prof. Nawangwe 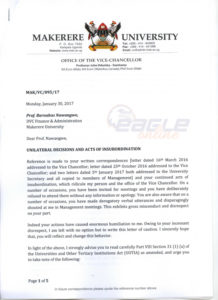 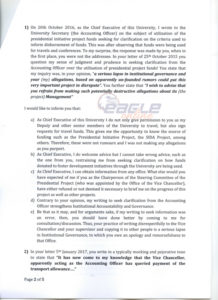 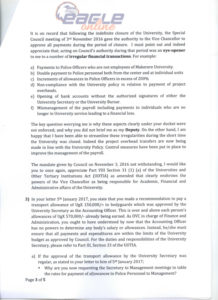 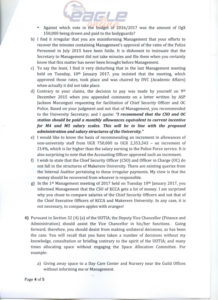 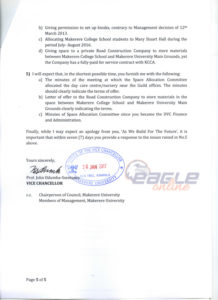 Perhaps, it is pertinent to recall that during the search for the 14th Vice Chancellor of Makerere University in 2012, Professors Ddumba Sentamu (64) and Barnabas Nawangwe (61) emerged frontrunners for the job ahead of then acting VC Prof. Venasius Baryamureeba and Professors Edward Kirumira, Eli Katunguka and Augustus Nuwagaba.

Both academics could not be reached for comment, with Prof. Ddumba not picking up calls. But the EagleOnline sought other university sources who commented on the matter that they said, is likely to split the varsity administration down the middle.

Speaking on condition of anonymity due to the ‘sensitivity of the matter’, university sources sounded out said the feud currently involves a number of top university personalities and that it started brewing when Prof. Ddumba reportedly penned a ‘dossier’ about the Council chairman Dr Wana-Etyem; the Chairman Appointments Board Bruce Balaba; the University Secretary Charles Barugahare and Prof. Nawangwe, as the ‘people giving him hard time’.

Describing it as a ‘battle of succession’ the sources further said that Prof. Ddumba, in his quest to retain the VC post, is carrying out ‘a smear campaign against potential rivals’ like Prof. Nawangwe (who beat him to the post in the previous search), while at the same time ‘secretly fighting’ others like Prof. Edward Kirumira, and Prof. Masazza of the School of Education.

Below is Prof. Nawangwe’s reply to Prof. Ddumba 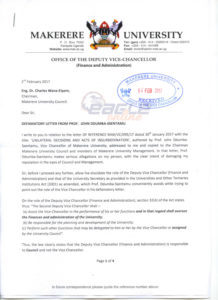 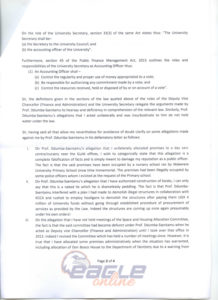 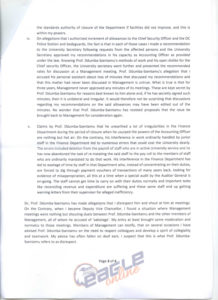 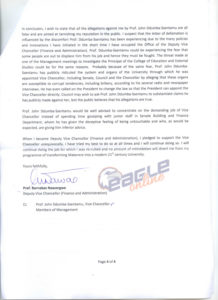 Evoking the name of the formerly embattled Dr. Stella Nyanzi of the Makerere Institute of Social Research (MISR), in which she took on her Director Prof. Mahmood Mamdani, the sources also accused Prof. Ddumba of ‘protecting his tribesmates’.

“There is a case (allegation) of people paying and changing marks for students and there is a well-known case in Senate,” one of the sources, added.

Ddumba is also alleged to be protecting some of the kiosk owners who were brought into the university under his permission but when Prof. Nawangwe started on the demolition programme, some the owners ran back to Ddumba for protection and hence Ddumba had to intervene to protect the interests of his cronies.

Sources further reveal why Nawangwe is a soft target, is because he has a good working relations with people at the university. It is also said that when Prof. Nawangwe, became DVC-F&A, he brought on board most of his ideas which he had proposed while campaigning for the VC post.

Ddumba is reported to have alleged that University Council members are cheap as they influenced by money in choosing who becomes VC and he has thereafter appealed to the Visitor of the university who happens to be the president to intervene and resort back to the old system of appointment, an issue which is under resistance by majority of the council and appointments’ committee.

“Nawangwe found nothing developmental going on at the university and there was nothing Prof. Ddumba would show but with many initiatives being implemented, Ddumba thinks, it will propel him to attain the VC ship”

Prof. Nawangwe isn’t the first being attacked by Ddumba as two weeks ago, he authored a letter to Deputy Vice Chancellor Academic Affairs, Okello Ogwang warning him of over drinking.

Last year, the vehicle belonging to the University Secretary was attached by court brokers, however, when the university finally paid the legal fees, one of the top professors at main building is alleged to have pocketed the money.