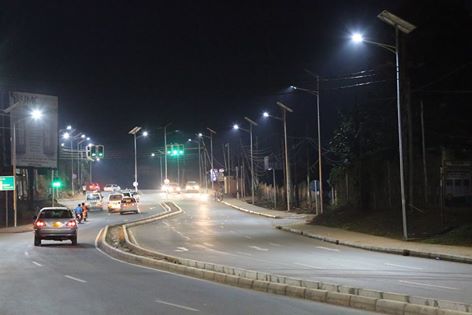 The Executive Director of the Kampala Capital City Authority Jennifer Musisi Semakula has lauded the World Bank and government for entrusting the rehabilitation of the Kamwokya-Bukoto stretch along Kira Road to KCCA.

The re-construction of the road was commissioned two years ago by Ms. Musisi and today, while speaking after the hand over by the contractor, the China Railway Seventh Group, she said the Shs4.8 billion road is modern, designed with a solar light system, surveillance cameras and modern traffic control lights.

The road also has a pedestrian walkway and a modern switching system to guide the blind, Ms Musisi, who recently got a three-year extension to her contract, said.

“Traffic on this road can be controlled at City Hall due to surveillance cameras installed and its system stores data for over one year,” Ms Musisi said.

She added that KCCA will massively invest in the refurbishment of schools, hospitals, the ongoing construction of roads like the Makerere Hill and Bakuli-Nakulabye roads and, the flyovers that are yet to commence.

Speaking at the function, the Director of Traffic in the Uganda Police Force Steven Kasiima warned boda boda riders against disrespecting traffic lights, saying the culpable will be punished basing on footage captured by surveillance cameras.

“These cameras will relieve us from criminals,” he said, adding that errant cyclists will have the motorcycles confiscated while others will pay hefty fines.