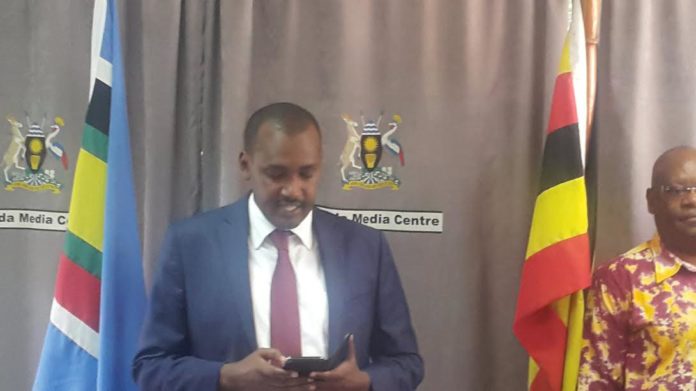 Government has insisted that all unregistered sim cards be switched off today midnight despite a resolution of Parliament that suggested that registration be extended by a year ahead.

Following the directives from Uganda Communications Commission to all telecom companies, for disconnection of all unregistered simcards by May, May 2017, the government has stood on its ground directing that process will gradually with those with mobily money on cards, will have to redirect the money to their bank accounts.

While updating media at Uganda Media Centre, the Minister for Information, Communication and Technology, Frank Tumwebaze said the switch off will disable voice communication on the affected SIM cards, the exercise of verification continues just as registration of citizens is continuous.

The Minister’s statement follows Parliamentarians anxiety to government to extend sim card registration and verification for at least one year. The motion was moved on by the Leader of Opposition Winnie Kiiza to cater for those who have not yet registered for national identity cards

‘’Overriding objective of this exercise is to ensure national security the government had set the first deadline a month ago which was found prudent to give an extension of one month so as to enable many Ugandans that had registered for the national IDs but had not collected them’’. Tumwebaze said.

The practice for the criminals has been to acquire new sim cards that either are unregistered in any names or fraudulently registered with wrong and falsified identities for use in the execution of their criminal operations and thereafter, discard them so that they are not traced is almost coming to an end.

In this process of disconnection, the Minister assured that Mobile money services will still stand for unregistered and unverified simcards and National Identification and Registration Authority (NIRA) will temporarily allow new ID applicants for some period of time.