The strike of State prosecutors under the Directorate of Public Prosecutions (DPP) begins tomorrow.

According to some of the documents seen by EagleOnline, State Attorneys have already informed their respective courts that they will not be available for work effective tomorrow so as to participate in the industrial action.

“I regret to inform you that as members of UAP and pursuant to the Resolutions of the General Assembly arrived at on 23rd of June 2017, we shall be closed from Wednesday the 12th day of July 2017 until further notice to participate in an industrial action,” reads a letter written to the Magistrate of Kajjansi Court.

The prosecutors are protesting over low pay.

According to the current salary structure of prosecutors under DPP, the lowest ranking state prosecutor earns a gross salary of Shs644, 963 a month with the highest paid prosecutor at the rank of Senior Principal State Attorney taking a gross monthly pay of Shs2.1 million. 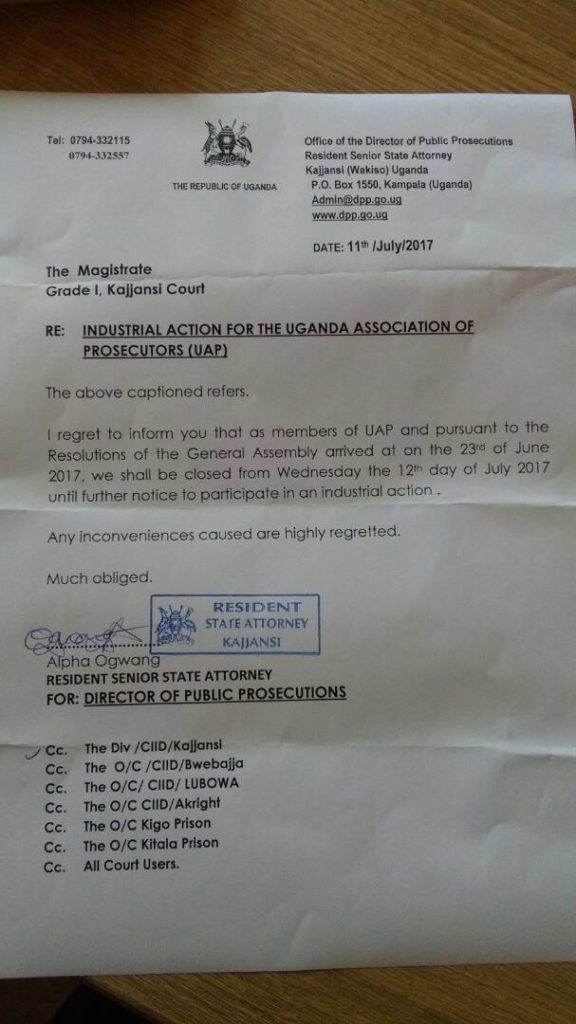 The association’s president, Baxter Bakibinga says this is too little given the fact that state attorneys handle complicated cases like terrorism and murder yet their salary is less than what a tea girl at KCCA earns.

He also added that they are not funded; do not receive allowances for working in hard-to-reach areas, professional practicing allowance and promotion. Furthermore, government had completely ignored their grievances thus leaving them with just one option – industrial action.