Recently, the Bank of Uganda sued Mr. Ruparelia for allegedly taking US$80 million from the now-defunct Crane Bank that is in receivership, in a case that is now before the High Court Commercial Division.

However, the lawyers have since ignored the agreement and opted for Court.

In a letter dated July 7 to lawyer Timothy Masembe Kanyerezi of MMAKS and David Mpanga of AF Mpanga Advocates, Mr. Ruparelia makes reference to a March 20 ‘Settlement and Release Agreement’, deliberated upon between the businessman and the other parties involved in the litigation, as one of the ways of having the matter settled amicably. 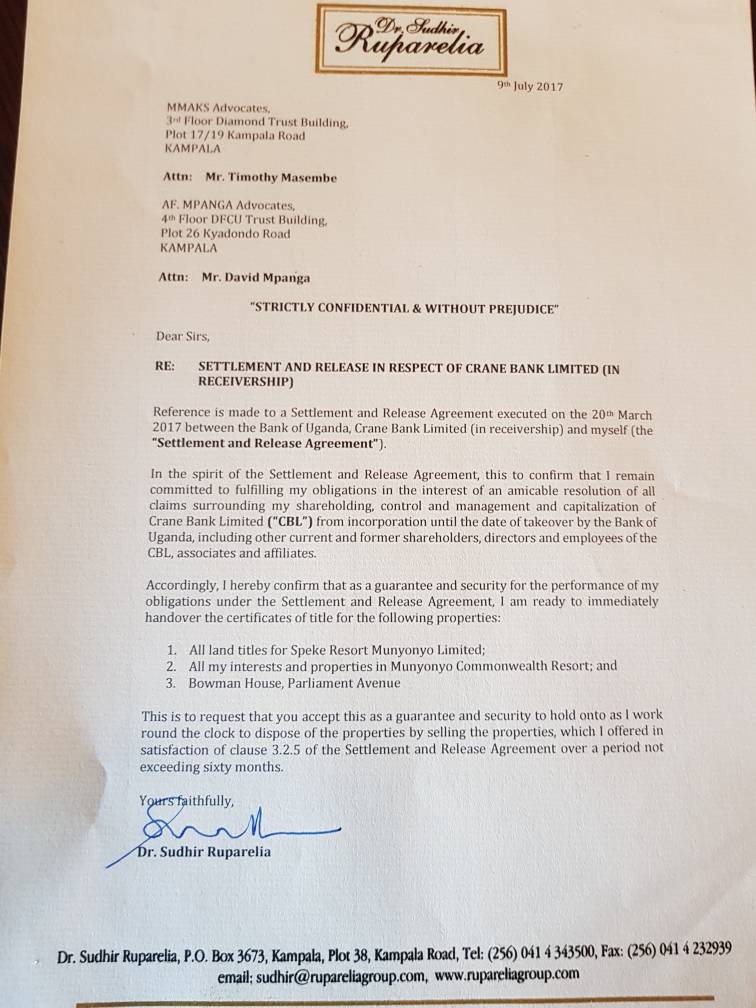 ‘In the spirit of the Settlement and Release Agreement, this is to confirm that I am committed to fulfilling my obligations in the interest of an amicable resolution of all claims surrounding my shareholding, control and management and capitalization of the Crane Bank (‘CBL’) from incorporation to the date of takeover by the Bank of Uganda, including other current and former shareholders, Directors and employees of the CBL, associates and affiliates’.

Mr. Ruparelia added: ‘Accordingly, I hereby confirm as a guarantee and security for the performance of my obligations under the ‘Settlement and Release Agreement’ I am ready to immediately hand over the certificates of title for the following properties’.

According to Mr. Ruparelia, the multibillion properties he offered should act as guarantee and security, while he works to dispose of the properties in six months. Sought for comment, Mr. Ruparelia, who recently filed his defence in the High Court, acknowledged the details of the July 7 letter and said he expected a positive response from the lawyers for his offer.

Meanwhile, it should be recalled that top officials at the BoU are reportedly divided over the procedures undertaken by the Central Bank that led to the court case between BoU and Mr. Ruparelia.

According to sources, some top managers argue that the BoU, through its Bank Supervision Directorate headed by Ms. Justine Bagyenda, failed to execute its mandate.

The protagonists also argued that the BoU had not exhausted all avenues that could lead to a negotiated settlement of the stand-off.