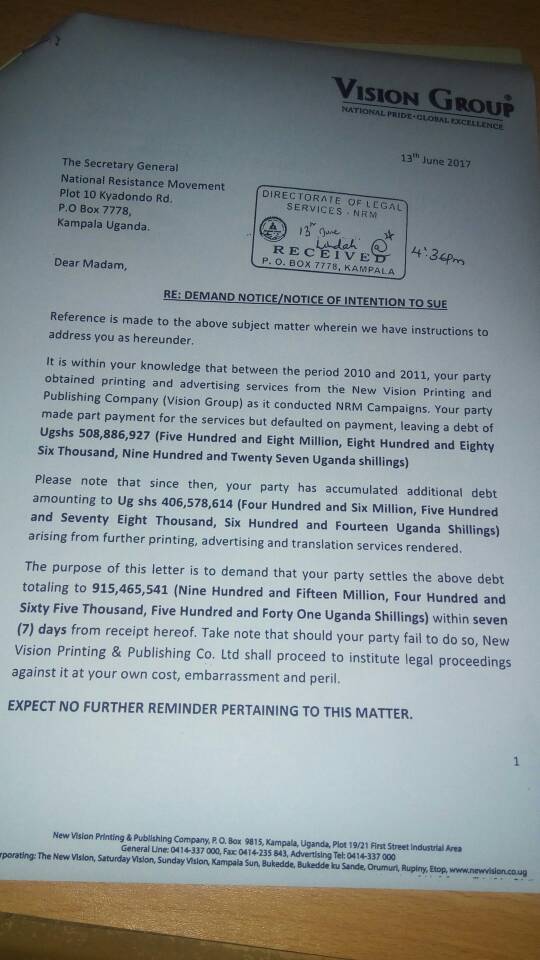 The New Vision has written to the National Resistance Movement (NRM) Secretary General Justin Kasule Lumumba, demanding that she clear an accumulated debt of Shs 915, 465, 541, accruing from printing, advertising and translation work done for the party during the 2011 election campaigns, or the party faces legal consequences. 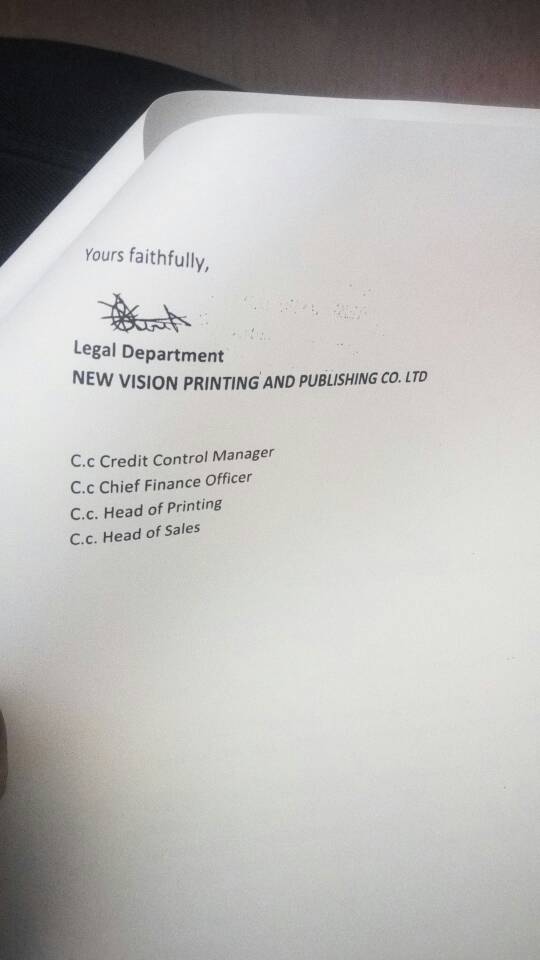 In a June 13 two-page letter by the majorly government-owned New Vision and received by the NRM Directorate of Legal Services, the ruling party is given seven days in which to clear the 6-year debt that initially was Shs508, 886, 927. Additional costs of Shs408, 578, 614 were also incurred by the party for services rendered after the campaigns, the letter from the New Vision Legal Department and copied to the Credit Control Manager, Chief Finance Officer, the Printing Manager and Head of Sales, indicates.

‘It is within your knowledge that between the period 2010 and 2011, your party obtained printing and advertising services from the New Vision Printing and Publishing Corporation (Vision Group) as it conducted NRM campaigns. Your party made part payment for the services but defaulted on payment, leaving a debt of Shs508, 886, 927…’ the letter states in part.

‘The purpose of this letter is to demand that your party settles the above debt totaling to  Shs 915, 465, 541 (Nine hundred and fifteen million, four hundred and sixty five thousand, five hundred and forty one Shillings) within seven days from receipt hereof. Take note that should your party fail to so, New Vision Printing and Publishing Co. Ltd shall proceed to institute legal proceedings against it at your own cost, embarrassment and peril,’ the letter adds.

‘Expect no further reminder pertaining to this matter,’ the letter adds.

By press time it was not possible to establish whether the NRM had cleared the debt within the seven-day period, but a source said the ruling party had not yet paid up.

Uganda can only be saved by Ugandans

The Obama globalists are back in the White House, already itching...

Shoot to kill civilians is barbaric. Internationally it could lead to...

Uganda qualifies for U-20 Afcon