Vendors in Nateete market have today engaged police in running battles, following protests that their workplace was taken over by a private company without compensation.

Last month, a row erupted between KCCA and market vendors who accused the authority of ‘selling’ Nateete market to RR Family Transporters without providing the latter with an alternative as is the norm with sitting tenants (vendors).

According to the vendors, the land where the market is located previously belonged to Mr. Musa Ddamulira, Ms Mandina Nasejje , Mr. Juma Lutwama, Mr. Suleiman Nsimbe and Mr. Ismail Sebugwawo, all of who acquired a loan of Shs250 million from Mr. David Bukalamye and failed to pay him back. This, the vendors claimed, led to the selling of the land where the market is located.

Further, they said that under their umbrella organization, the Nateete Vendors Company, they acquired a lease of 46 years from the former proprietors, but that it was cancelled without compensation, prompting the current stand-off.

And this morning, police, armed with tear gas canisters, was called in to quell the rioting traders, who in return said they would only listen to the Inspector General of Police, Gen. Kale Kayihura. 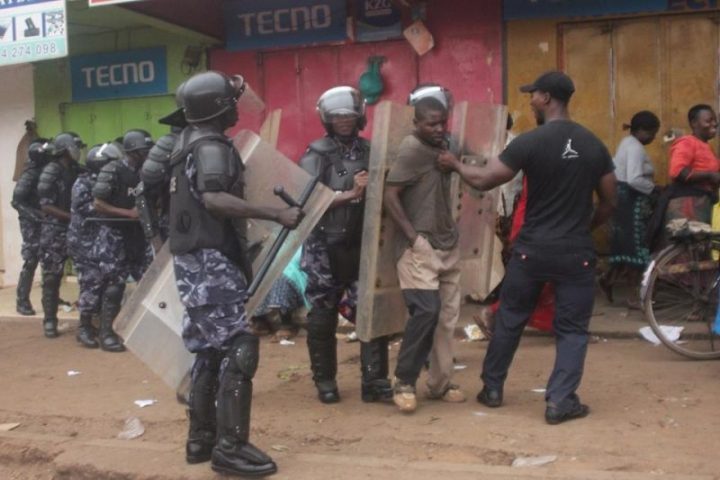 “Bring the IGP to us,” the rioting traders chanted in unison as police fired tear gas and live bullets in an attempt to disperse them. The vendors also said that KCCA and the RR Family Transporters company have been collecting revenue from them upto their eviction.

Meanwhile, earlier on July 18, the Lord Mayor Erias Lukwago visited the market and vowed to fight for the vendors’ rights in court.

Interestingly, on the same day the Minister for Kampala Beti Olive Kamya convened a press conference at her office and advised the vendors to relocate to the already constructed markets such as Wandegeya and Usafi markets, saying that the Nateete market is illegal.