The Commercial Court should brace itself for legal action that may pan out like that in the ongoing Kenya Presidential Elections Petition of 2017, when the lawyers of tycoon Sudhir Ruperalia take on those of Crane Bank and the Bank of Uganda.

Indeed, even before the High Court Commercial Division Judge David Wangututsi starts hearing the merits and demerits of the Crane Bank-Bank of Uganda-Sudhir Ruparelia case, legal jargon and gymnastics and, omissions and commissions are at play, with both legal teams in deep effort to outwit each other, at least for now. 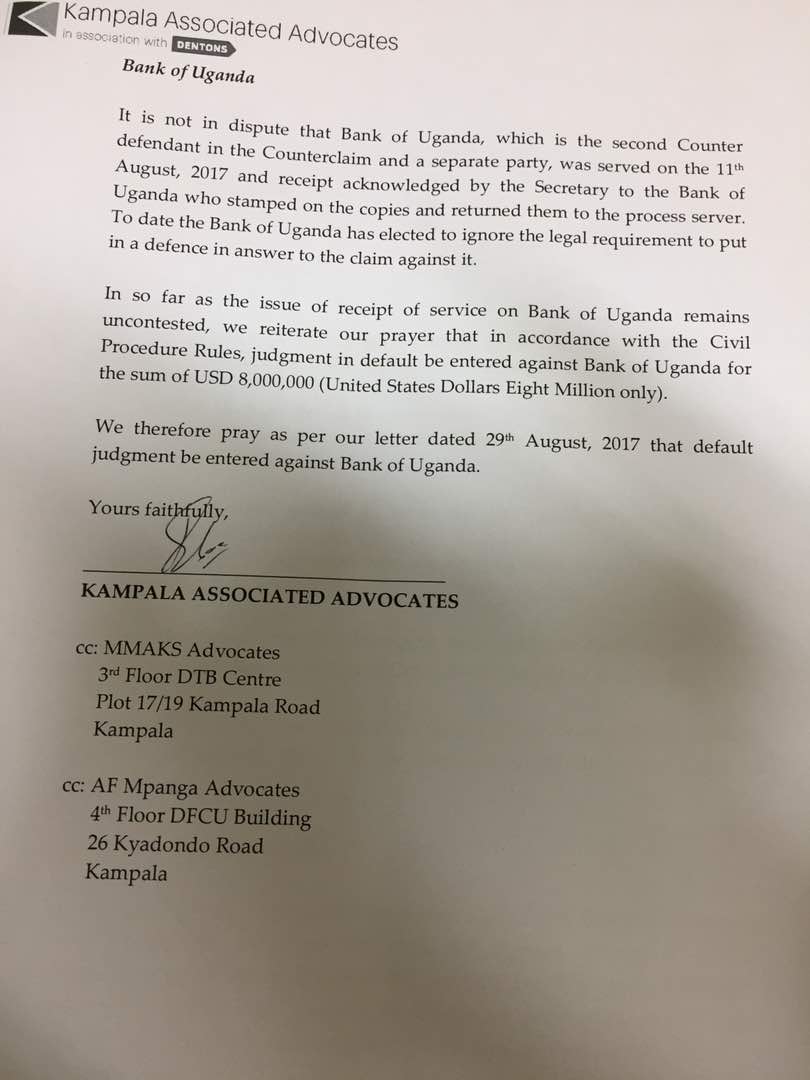 As a result the current legal jinx before the Commercial Court Registrar is over a claim of US$8 million, advanced in a counterclaim by Mr. Ruparelia’s defence team, Ms Kampala Associated Advocates, against Bank of Uganda for allegedly failing to enter its defence in the stipulated time of 15 days which, according to KAA, should have been before August 29.

In an August 29 letter by KAA to the Registrar, the law firm faults the Bank of Uganda for failing to act in accordance with the ‘legal requirement’ of Order 5 Rule 10 of the Civil Procedure Rules.

But earlier on the same day, the BoU defence team, led by lawyers from the MMAKS firm, had also written to the Registrar, protesting about the service process in which they said one of the plaintiff’s lawyers, Ms. AF Mpanga Advocates, was not served with the counterclaim. MMAKS also contested the date of service, saying it was August 14, and not August 11 as indicated by Mr. Ruparelia’s lawyers.

However, in what appears an ambush, the KAA lawyers quickly made reference to the Civil Procedure Rules.

‘The legal requirement under Order 5 Rule 10 is serve the Defendant and his agent – not all agents,’ KAA wrote, and added that the BoU lawyers, Ms. MMAKS Advocates were on August 11 served with two copies of the claim, with one copy ostensibly for onward transmission to Ms. AF Mpanga Advocates, the plaintiff’s second lawyer.

The KAA letter adds: ‘It is not in dispute that Bank of Uganda, which is the second counter Defendant in the counterclaim and a separate party, was served on August 11 and receipt acknowledged by the Secretary to the Bank of Uganda who stamped on them and returned them to the process server. To date the Bank of Uganda has elected to ignore the legal requirement to put in a defence in answer to the claim against it.

In conclusion, the KAA implored the Registrar to enter judgment against the BoU, for US$8 million.

‘In so far as the issue of receipt of service on Bank of Uganda remains uncontested, we reiterate our prayer that in accordance with the Civil Procedure Rules, judgment in default be entered against Bank of Uganda for USD8, 000, 000 (United States Dollars eight million only)’.

We therefore pray as per our latter dated 29 August 2017, that default judgment be entered against Bank of Uganda’, the KAA letter concludes.