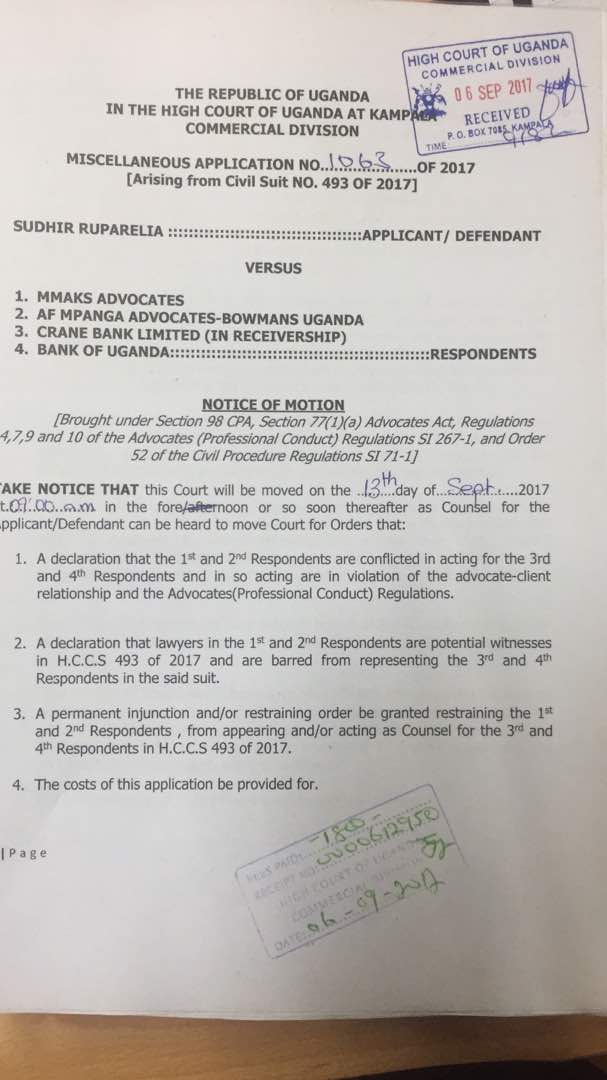 Following a depone by billionaire businessman Sudhir Ruparelia seeking to have the city law firms of MMAKS Advocates and AF Mpanga Advocates – Bowmans Uganda from representing the Bank of Uganda (BoU) and Crane Bank in the ongoing case that resulted from the closure of the latter, the court has set September 13 as the date of hearing.

About a month ago Mr. Ruparelia, through his lawyers Ms. Kampala Associated Advocates (KAA), petitioned court seeking it to order the BoU to pay US$8 million, after the central bank failure to file a defence in the stipulated time of 15 days, as per the Civil Procedure Rules.

Consequently, through a ‘Reply to the Written Statement of Defence’ the two law firms challenged Mr. Ruparelia’s demands, prompting the businessman to file the Notice of Motion seeking to have them barred from representing both Bank of Uganda and Crane Bank in the ongoing case.

In a Notice of Motion filed yesterday, Mr. Ruparelia avers that by representing the BoU and Crane Bank, the two law firms, represented by lawyers Timothy Masembe Kanyerezi and David Mpanga, are acting in conflict of interest.

‘A declaration that the 1st and 2nd Respondents are conflicted in acting for the 3rd and 4th Respondents and in so acting are in violation of the advocate-client relationship and the Advocates (Professional Regulations) conduct’, the Notice of Motion reads in part.

According to Mr. Ruparelia, the two law firms and lawyers Masembe Kanyerezi and David Mpanga are privy to sensitive information regarding the Crane Bank, having previously been hired by 3rd Respondent (Crane Bank). He further avers that given that past client-advocate relationship with Crane Bank, the two law firms or their lawyers are potential witnesses in the ongoing case.

‘A declaration that the lawyers in the 1st and 2nd Respondents are potential witnesses in HCCS 493 of 2017 and are barred from representing the 3rd and 4th Respondents in the said suit’, the Notice of Motion states.

‘A permanent injunction and/ or restraining order be granted restraining the   1st and 2nd Respondents from appearing and or acting as Counsel for the 3rd and 4th Respondents in HCCS 493 of 2017,’ the Notice of Motion adds.