Raging debate on the age limit clause in the 1995 Constitution has caused acrimony in political circles, with the latest being Aruu County MP Samuel Odonga Otto’s move to demand that State Investment Minister Evelyn Anite pay him Shs300 million for tarnishing his image.

In a notice of intent to sue issued by Odonga Otto and Company Advocates to Minister Anite, the lawyers say that while appearing on two TV talk-shows, she wantonly called MP Otto a drunkard. 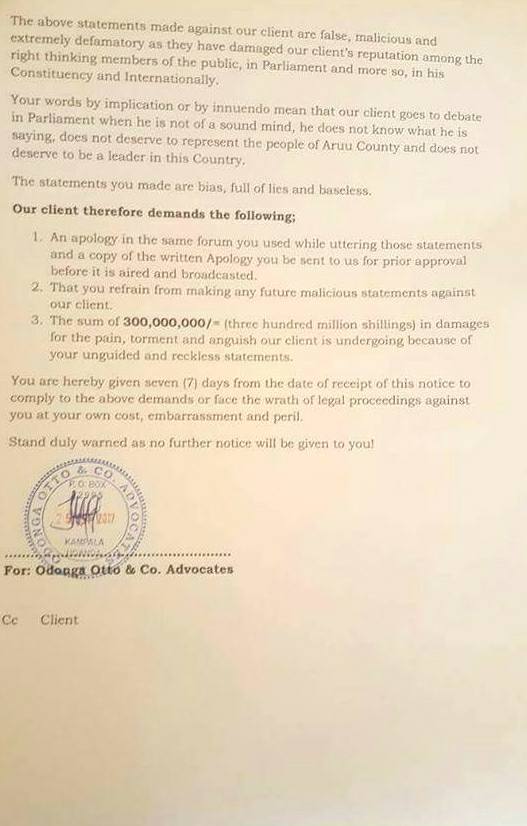 ‘Your words, by implication or innuendo, mean that our client goes to debate in Parliament when he is not of sound mind, does not know what he is saying, does not deserve to represent the people of Aruu County and does not deserve to be a leader in this court,’ the notice reads in part.

The notice which also implores Anite, who is also the Koboko Woman MP, to apologise within 7 days, adds: ‘The statements you made are bias, full of lies and baseless’.

The two politicians fell out after Anite, a member of the ruling National Resistance Movement (NRM) party spearheaded the amendment of the Constitution to lift the age limit that is capped at 75 years.

Her subsequent actions and words attracted ire from the opposition, with Odonga Otto, an opposition Forum for democratic Change (FDC) MP taking on her in a seeming verbal contest with no-holds-barred.

By press time it was not possible to establish Minister Anite’s next course of action.

MPs and other sections of the public opposed to the lifting of the age limit argue that the move is intended to pave the way for President Yoweri Museveni to rule for life, while those in support say the clause is ‘discriminatory’ and should be expunged.