Police have summoned the News Editors of Monitor Publications Limited and that of Red Pepper to appear at CID headquarters in Kibuli on Monday over stories related to Age Limit.

Police say they are conducting an inquiry into a story titled ‘Age limit budget of the legal and parliamentary affairs committee shows that the members will spend Shs700 million in 10 days’. That appeared in the monitor this week

However, in their summons, police does not indicate which charges are preferred on the Editors but instead say it is an interview.

“You are therefore, in pursuance at the provision of section 27A of the police Act (As amended) required to report before the undersigned at CID headquarters Kibuli on October 16, 2017 at 1000hrs in that regard.” Reads the summons signed by a one Isaac Oketcho on behalf of Director Criminal Investigation to Monitor Publications Limited.

However, Mr. Barnard Tabaire, a co-founder and Programmes Director at African Centre for Media Excellency (ACME) says the summons to media houses is part of the wider state plan to silence all those opposed to the Age Limit amendment and also to instill fear among those opposed.

“Obviously it is the strategy to intimidate Members of Parliament opposed and now the media. They have no reason they are pushing it rather to have Museveni running for ever.” Mr Tabaire said

He added “They are using the tools available to see that discussion on the debate is controlled and this is a big issue which they think that the journalists shouldn’t dig up.”

Following the chaos at Parliament prompted by the imminent tabling of a private members bill to lift the presidential age limit that is capped at 75 years, police has continued to issue summons to those opposed to the bill. It all started when they summoned 24 legislators for interrogation at the CID headquarters in Kibuli. 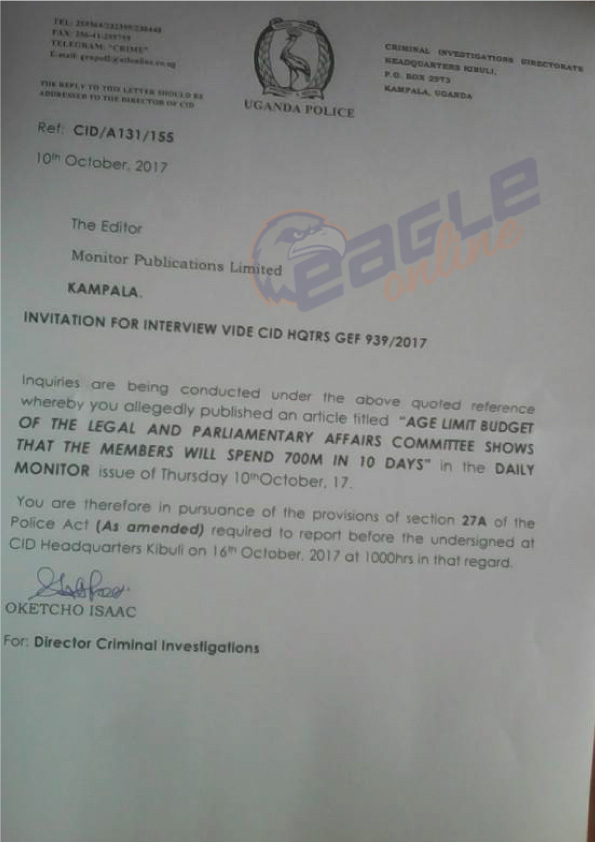 Interestingly,  the State Minister for Water and Resources Ronald Kibuule, who reportedly sneaked a gun into the chambers on the first day of the chaos in contravention of the parliamentary rules, was not summoned but instead Nakawa legislator Michael Kabazigurka who was taken to parliament on the will chair was instead summoned.