Forty eight Ugandan migrant labourers have died in the United Arab Emirates (UAE) and the neighboring countries of Oman, Bahrain and Kuwait in the last nine months, the Parliamentary Committee on Gender Labour and Social Development, has said.

The members of the committee headed by Ngora county MP David Abala and Western Region Youth MP Mwine Mpaka, said that they were shocked to learn during a field visit to Dubai last week that 35 of the deaths are linked to suicide occasioned by maltreatment by their Arab bosses.

Abala said other deaths were as a result of heart attack, traumatic shock, accidents, septic shock, cardiac arrest, murder, drowning, meningitis and complications of HIV. The Ugandans, who died according to a list released, are Christians. 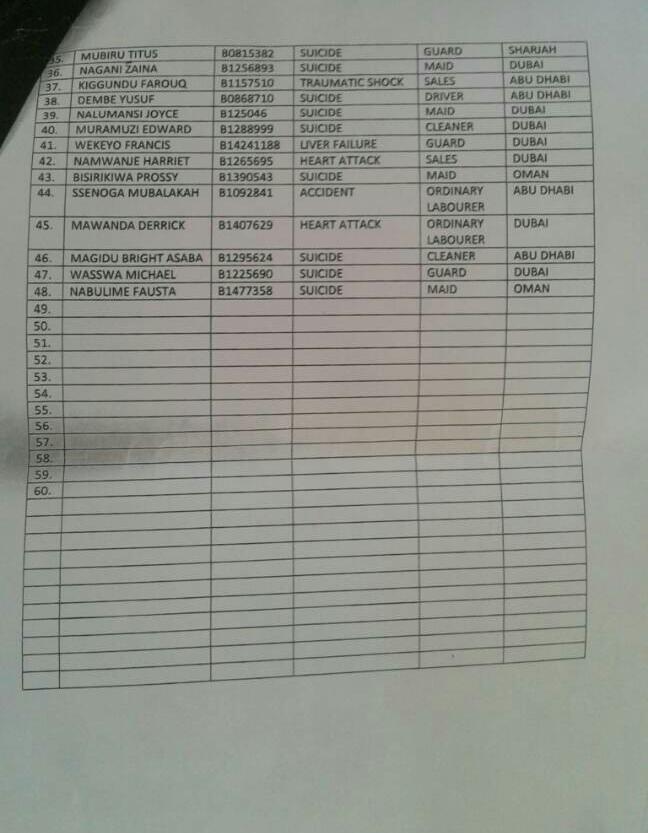 “Most of these deaths are as a result of mistreatment where most of the dead were denied food and a better livelihood,” Abala said, amid allegations that Muslims in the Arab countries do not treat Christians humanly.

“In most of those countries, the labour source country ceases to take responsibility over you within the first three months and thereafter you become a property of your master and the labour companies can no longer follow you up or anything that befalls you,” Mpaka said.

Uganda has only entered into a bilateral agreement with two Middle East countries which include Saudi Arabia and Jordan.

“We are not against labour export; every year Uganda exports over 50, 000 young boys and girls but in this matter, exporting youths to countries where we don’t have bilateral agreement leaves many Ugandans victims of the labour laws in those countries,” he said.

Mpaka urged government to set up a rescue fund as well as a home in these countries to deal with the cases of girls that have undergone shock to have them rehabilitated before they are brought back home.

A source in one of the Arab countries said that most of the Ugandan youth who get there through unofficial channels face many difficulties which are forced on them by their employers. “Those people are treated like dogs,” he said, adding that he also fears for his life.

Female employees from Uganda have in the past been exploited sexually forcing some of them to return to Uganda. Many have secretly cried expressed their plight on social media such as Facebook, calling for rescue.

The latest death reports come at the time when Uganda is delivering about 400.000 graduates to the local market every year but the market can only accommodate about 10,000.

As young Ugandans die in Arab countries in search of jobs as maids, guards, waitresses and drivers, its neighbour, Rwanda, does not allow its citizens to go Arab countries for similar jobs, government saying such jobs compromise the dignity of Rwandans.

Uganda faces the high rate of unemployment, which has forced its educated youth (20-30 years), majority with degrees and diplomas to look for which jobs in the Arab world.

According to the latest housing and population census done by the Uganda Bureau of Statistics, the age category of youth 20 to 24 years has 65% of its members unemployed. For those above 25 years, the situation is worse, with over 90% of them unemployed. Uganda has one of the youngest and fastest growing population rates in the world with its fertility rate of 3% one of the highest in Sub Saharan Africa.

Government has licensed over 60 companies that export labour, but there are individuals based in the country and outside that facilitate the movement of labourers to the Arab nations. Many of the youths who are taken by individuals are the ones who suffer the most.

Nonetheless, despite the challenges there are those who have succeeded in working in the Arab world as drivers, maids, waiters and guards, among others. They are helping the families back home, including paying school fees for their siblings and meeting families’ medical care bills.