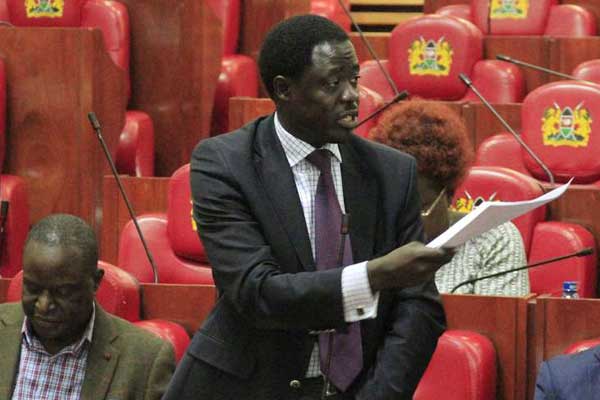 Homa Bay Town MP Peter Kaluma has drafted a Bill seeking the secession of all but seven of Kenya’s 47 counties to form the People’s Republic of Kenya.
Apart from Mt Kenya counties of Nyeri, Murang’a, Kiambu, Kirinyaga, Nyandarua, Embu, and Tharaka-Nithi, Mr Kaluma wants all the other 40 to break away from Kenya, alleging that they have been continually discriminated upon by successive governments.
The vote-rich Rift Valley, with a total of 4.4 million of the 19.63 million total registered voters in its 14 counties, is the political base of Deputy President William Ruto, a furiously ambitious politician who wants to take over from his boss President Uhuru Kenyatta in 2022.
Mr Kaluma, in a draft Bill he has prepared for scrutiny by the electoral commission, alleges that President Kenyatta’s government has “rigged elections, emasculated Parliament, commissions and independent offices, and had run a systemic and systematic suppression of the other groups and communities”.
DEVOLUTION
He further argues that President Kenyatta’s government has starved devolution of the growth it needs, and that it has retained most of the funds in Nairobi.
“The objective of the Bill is therefore to amend the Constitution to split to allow for the creation of a new state to give effect to the aspirations of the people of Kenya,” says Mr Kaluma in the Bill.
Opposition leader Raila Odinga has spoken about the secession bid, saying it is a sign of deep-seated anger among Kenyans.
“The real issue about Kenya is not the rigged elections. That is not the issue. The issue is deeper than that of just rigging of an election. When you see some governor’s stand up and say “we want to secede from Kenya”, supported by members of Parliament and members of county assembly, then you must know that there is something seriously wrong with project Kenya,” Mr Odinga told Kenyans living in New Jersey, US.
REPEAT POLL
Mr Odinga withdrew from the October 26 repeat presidential election, protesting lack of electoral reforms after he successfully petitioned President Kenyatta’s August 8 win at the Supreme Court.
The former prime minister, with almost fanatical following in Nyanza, and a sizeable support in the Coast and western Kenya, has called for a six-month interim government to allow for a fresh election run by a new electoral commission – a path he says is the only way to guarantee peace in a deeply political country where inclusion has largely been defined by the leading group’s communities of origin.
COAST SECESSION
Already, Mombasa Governor Hassan Ali Joho and his Kilifi counterpart Amason Kingi have called for the secession of the Coast, calls that have been supported by other opposition-leaning politicians.
“You have heard it from the Coast, and we support it, that if things go on this way, let them (Jubilee government) have their own country, and we form ours,” Homa Bay Woma Rep Gladys Wanga told a rally at Nairobi’s Jacaranda Grounds on Sunday.
The counties from the Rift that Mr Kaluma wants to secede are Turkana, West Pokot, Samburu, Trans Nzoia, Uasin Gishu, Elgeyo-Marakwet, Nandi, Baringo, Laikipia, Nakuru, Narok, Kajiado, Kericho, and Bomet.
The 14 will then join Mombasa, Kwale, Kilifi, Tana River, Lamu, and Taita Taveta from the Coast, Garissa, Wajir, and Mandera from north eastern, Marsabit, Isiolo, Meru, Kitui, Machakos, and Makueni from eastern, and Kakamega, Vihiga, Bungoma, and Busia from western.
Others are those in opposition chief Raila Odinga’s Nyanza bastion of Siaya, Kisumu, Homa Bay, Migori, Kisii, Nyamira, with Nairobi City – Kenya’s “perfect battleground” – being the 25th county.
IEBC
Already, the Independent Electoral and Boundaries Commission (IEBC) has given Mr Kaluma the green light to present the Bill either through Parliament or by collecting one million signatures in support of the initiative.
Should he choose the parliamentary initiative way, Mr Kaluma will have to convince two-thirds of the members in the National Assembly (233 of the 349) and the Senate (45 of the 67) to support it, another tall order considering Jubilee Party’s almost absolute majority in the two Houses.
After the Bill has been passed, the Speakers of the two Houses will present it to the President, who will then require the IEBC to conduct a referendum within 90 days.
SIGNATURES
Similarly, the opposition MP can cause the Bill to be passed through the popular initiative by having one million signatures to back it, and upon certification of the signatures, the IEBC will then send the Bill to all the 47 county assemblies, out of which at least 24 must support it for it to be sent to Parliament.
If passed by a majority of the two Houses, it will be signed to law by the President.
If any of the two Houses fails to pass the Bill to law, it will then be subjected to a referendum where all Kenyan voters will be eligible to vote on it, with a simple majority taking the day.