The Bank of Uganda and tycoon Sudhir Ruparelia have agreed to settle the dispute regarding the closure of Crane Bank through mediation.

This move by the two parties is laudable and depicts a level of maturity that was lacking at the beginning of the whole saga, a development which led the central bank to plough billions of taxpayers’ money to pay lawyers to pursue the case against Mr. Ruparelia.

Surely, the country is financially constrained and can ill-afford to splurge out the hard-earned money on a few individuals, yet the majority of Ugandans are suffering, some even going without food for days.

Currently, almost the whole public sector is on strike owing to the poor pay and working conditions. Against such a background therefore, the country badly needs value-for-money expenditures, mostly from institutions that are established to supervise monetary policy and also to regulate the supply of money in the country. Why then spend Shs4 billion on litigation when it can solve other pressing needs? And why did BoU deny that they hadn’t paid money to lawyers in the first place? All these calls for a thoroughly investigations into activities of BoU especially its supervisory role. 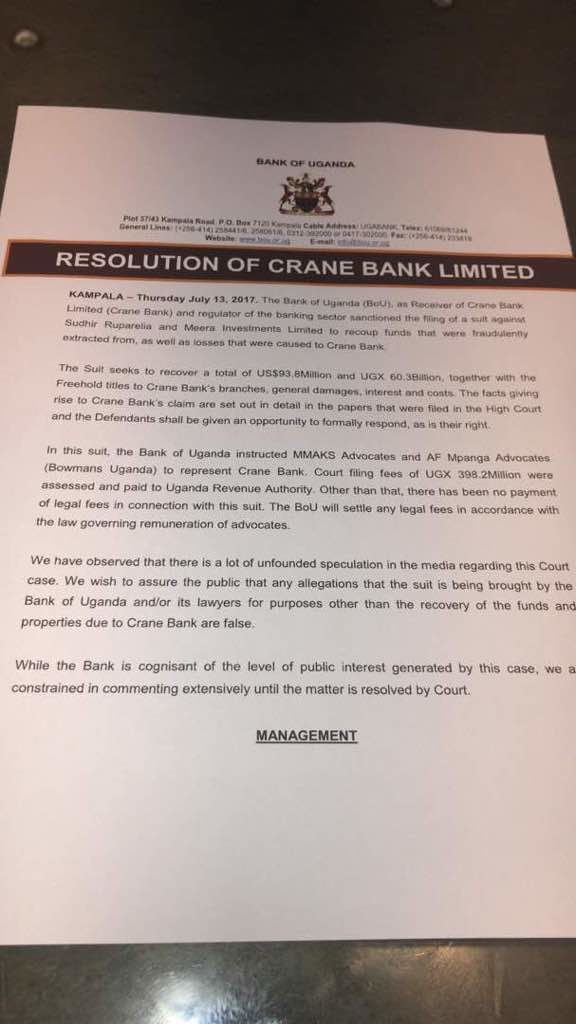 Without prejudice, Mr. Ruparelia was employing hundreds of people, in the process helping improve the lives of so many including his employees’ dependents. Also, it is worth noting that through his various companies, Mr. Ruparelia was also one of the biggest contributors to the national kitty.

Of course the above do not exonerate Mr. Ruparelia from pursuing the duties of a good citizen, but on the other hand his huge investments in the country should provide him with a leveraging point for negotiations that lead to an amicable resolution of any disputes that might arise.

That said, henceforth the BoU should strive to ensure that commercial banks in the country are managed in a manner that does not destabilise the economy.

In other words, the central bank should strengthen its bank supervision directorate to ensure that the commercial banks adhere to the fiduciary management guidelines as set by the BoU.