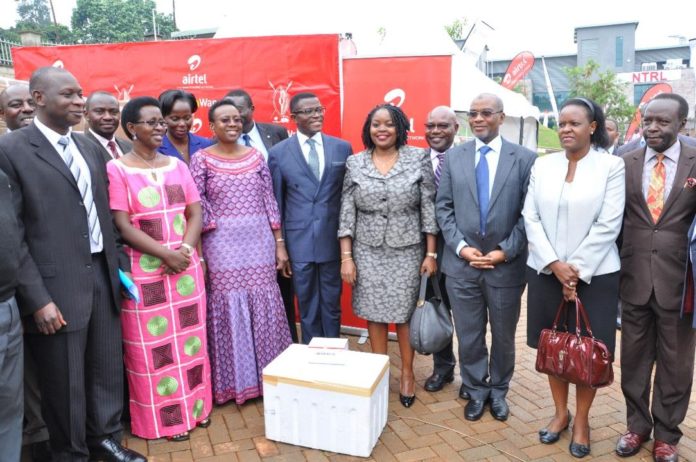 Airtel Uganda and the Buganda Kingdom have this morning handed over 60,000 sickle cell testing kits to the administration of The Uganda National Health Laboratory Services, the institution best equipped to carry out conclusive testing for the disease.

The kits were bought from the proceeds of the Kabaka Birthday Run 2017 and speaking at the handover event, Airtel Uganda Director of Human Resources, Flavia Ntambi Lwanga, echoed the telecoms commitment to giving back to its communities.

“Airtel Uganda is honored to be working with the Buganda Kingdom, the Uganda Sickle Cell Foundation and the Ministry Of Health on this noble cause. It is our commitment to give back to the communities in which we operate hence us creating such impactful partnerships. In addition to the Kabaka Run, we have other Corporate Social Responsibility activities most notably the Airtel Health Camps which take place in different regions of the country every few quarter where we extend treatment and checkups to over 15,000 people,” Ms. Lwanga noted.

On his part Katikiro Charles Peter Mayiga commended Airtel for coming on board to support the noble cause.

“The kits are free for use and will allow over 120,000 people to get tested for the sickle cell disease and this will help fight the prevalence rate. I call upon Ugandans to take advantage of this donation and get tested as this will be the only way we can fight this disease,” he added.

According to statistics from the Ministry of Health, each year over 30,000 babies are born with the sickle cell disease and over 80% die before their 5th birthday contributing to 15% infant mortality.

These statistics have played a great role in making the fight against the sickle cell disease a key agenda for the Buganda Kingdom.