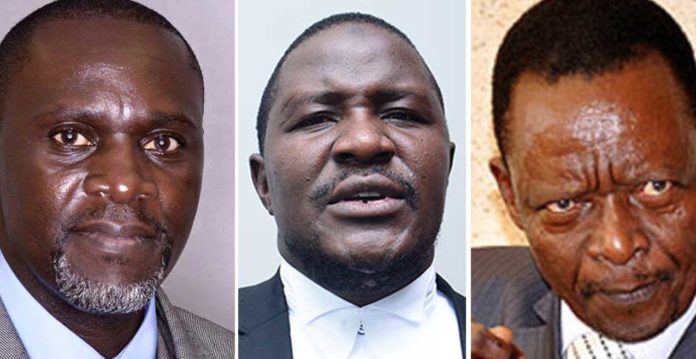 Assistant court registrar of High Court Joy Kabagye has today dismissed application filed Former presidential candidate Abed Bwanika, Asuman Basalirwa, president general of the Truth and Justice Forum (JEEMA) and former legislator for Rubaga South John Ken Lukyamuzi.
The three had asked court to block the amendment of Article 102 (b) and instead take it through referendum.
In her ruling Ms Kabagye said parliament under article 79 is mandated to amend any article of the constitution therefore, its powers cannot be interrupted since it has not violated at laws as far as the amendment is concerned.
‘’Since parliament is an independent arm government, Applicants concerns were so empirical however at this point court has nothing to interrupt its powers’’ she said in her ruling at high court.
She also faulted them of excluding Electoral Commission which they have an issue with about the manual way of collecting signatures which has retarded holding of a referendum about the controversial bill.
Earlier in first sitting Attorney General William Byaruhanga asked court be mindful not to interfere with the business of the second arm of government and to uphold the doctrine of its powers however Ladislas Lwakafuzi petitioner’s layer argued him that court has always rendered acts passed by parliament as unconstitutional, null and void.
He further told court that the people of Uganda through court want to have a referendum on article 102 (b) of the constitution.
Early this year, Dr. Bwanika received a form from EC to collect 1.5 million signatures required for referendum to be held, a process that was frustrated by police that confiscated documents with over 40,000 signatures, making it impossible for him to make submissions on time yet Parliament is set to debate the matter.
The three wanted court to compel the Uganda Communications Commission (UCC) provide a ‘USSD code’ on which they can collect electoral signatures and also compel the Electoral Commission to accept and consider the said signatures for purposes of holding a referendum.
The three contended that it’s cheaper and quicker to collect Electronic signatures as opposed to the traditional way but the EC, reportedly on the advice of UCC, has refused to accept this move.
“Unless court orders that Parliament temporarily suspends discussing the age limit amendment bill, the citizens’ rights to directly participate in the governance of their country will be violated” Lwakafuzi said at the High Court on Monday after filing petition.