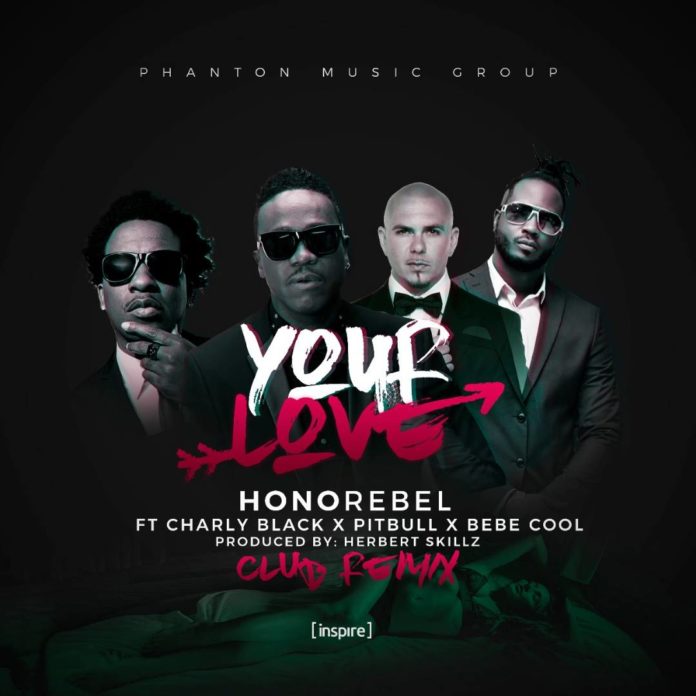 Its a Jamaica, Miami and Uganda connection which has all the ingredients that one needs to make a hit record like ‘Your Love’ club remix.

Honorebel and Charly Black from Jamaica, Pitbull from Miami via Cuba, Bebe Cool and Herbert Skillz from Uganda, pretty much makes this record a Global and International club banger.

The new single and remix is a great depiction of his journey as an international, crossover musician.

This latest release of Honorebel’s “Your Love” club remix is filled with culture and experience ranging widely from different influences. Throughout his career, Honorebel has never been categorized into one genre.  He effortlessly fuses Reggae, Pop, EDM, Dancehall, Reggae-ton, Moombahton and other influential sounds to create his universal appeal and one of the most unique sounds in modern music.

In 2017 Honorebel Peaked #15 on the Latin Billboard charts with the reggae-ton hit  “Mari” remix with Farina and El Micha which has over 9 million youtube views. About his new single “Your Love” and the club remix,  its Producer by Dj Codeman and Herbert Skillz, two super producer who are signed by Honorebel’s Phantom Music Group Record Label.

Asked to comment on the hit single remix, Honorebel had this to say: “I feel like music is a feelings and a vibes, so I go where ever that vibes and feelings takes me. I think Charly Black gave it that authentic, organic dancehall feelings, and both of our futuristic lyrical flavor and flow gave the song a nice blend, Pitbull gave it the International brand and Bebe Cool stamp it with that real African Dancehall sound which took the remix to another level.”