The Inspectorate of Government is investigating Ms Mary Kamuli Kutesa, the Director Legal Affairs at UNRA.

In a letter dated January 9, 2018, the IGG wants UNRA Executive Director, Allen Kagina to action on Kutesa within 30 days.

Ms Kutesa also serves as a member of the contracts committee of Uganda National Roads Authority (UNRA) on allegations conflict of interest.
In a letter which EagleOnline has obtained, Ms Kutesa is faulted for not disclosing her husband’s relationship with certain construction firms which do business with UNRA.

“The Inspectorate of Government received a complaint addressed to you regarding Ms Mary Kamuli Kutesa, a member of the contracts committee of UNRA. It was also alleged that her presence on the contracts committee disadvantages other companies which are eliminated from procurement process without any justifiable reasons and biases the procurement process of the whole UNRA organization”. reads the letter in part.

The letter also states that Kutesa’s husband through his law firm Arcodco and Co. Advocates represent construction companies like China Wuyi, China Communications, which information was not disclosed.
“The purpose of this letter is to request you to take appropriate action into the matter above and report to this office in 30 days from now,” the IGG directed. This website has reliably learnt that a one Mbele petitioned the IGG to investigate Kutesa basing on the above allegations.

Last yeek a top official at UNRA was on the spotlight for allegedly giving jobs to four relatives, to work in UNRA, one of the best-paying parastatals in Uganda.
The matter of allegedly hiring relatives, commonly known as nepotism, has now been put at the discretion of the Inspectorate of Government (IGG), who has since started investigations into the allegations.
UNRA is overseeing the development of the road sector in Uganda, a task heaped on the UNRA Executive Director Allen Kagina and members of her team, most of them newly-recruited. 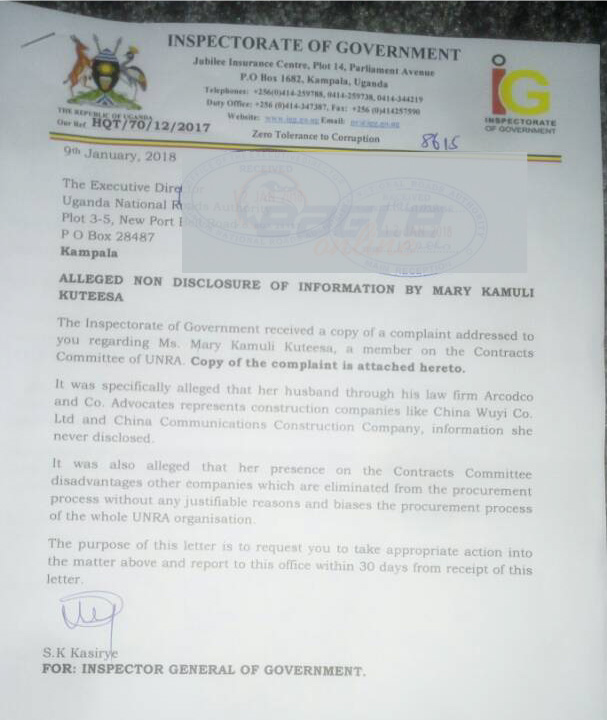 It should be recalled that in May last year, following scathing allegations of massive corruption at UNRA, the institution laid off over 900 workers in the biggest-ever single public sector restricting drive and consequently embarked on a new recruitment drive. It is this new process that has now come under scrutiny.
And sources within UNRA told this Website that ‘a top boss’ brought the four relatives from Canada and posted them in the lucrative planning and administration department.
“It is sad that competent people were sacked under the pretext of sweeping corrupt officials but what is happening here is dangerous. How can four members of one family be recruited in one department as if they are no other qualified Ugandans?” a source told EagleOnline.
Last year Inspectorate of Government Spokesperson, Ali Munira confirmed investigations were underway but said the inquiry is still at a tender stage for her to divulge details. However, a year down, the IGG hasn’t released the findings. Some of the affected former employees have since petitioned High Court.
“We are working on it but as you are aware, we only received the complaints two weeks ago but investigations are going on,” Ms Munira said on phone.