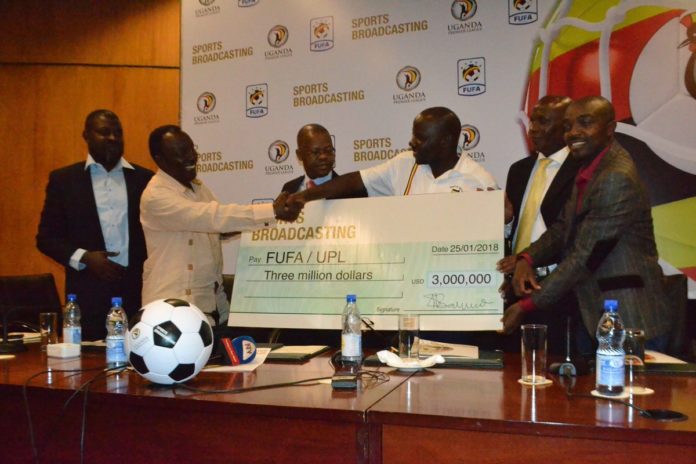 The development follows the withdraw of former broadcasting sponsors Azam, effective this year and part of the Sports Broadcasting US$3 million will be distributed for airing the tournaments is as follows: UPL $600,000; Big League $70,000 and Uganda Cup $80,000.

‘’Sports Broadcasting will rely 99 percent of local football (Ugandan content) on Television. We shall change the face of football broadcast in Uganda; we are experts in marketing football and sports personalities,” Mbidde said.

Addressing the media at the launch of the Sports Broadcasting sponsorship, the chairman for Uganda Premier League Arinaitwe Rugyendo said that the development is a milestone for Ugandan football.

‘’When I took over the leadership of the board. I preached three pillars upon which our football was to be driven – Stability, Harmony and Integrity. Stability has reached us thus far,” Rugyendo said.

He lauded Sports Broadcasting, a Ugandan company, for coming on board to ‘dive at the deep end of Ugandan football’.

Zubair Galiwango, who represented the State Sports Minister, Charles Bakabulindi said government of Uganda has already approved Shs 17 billion for sports development from January to June 2018 and part of this money will be used by FUFA for AFCON 2019 qualifiers.