The Barclays Africa Group African Financial Markets Index can make a valuable contribution.  It provides data for each of the 17 African economies covered by the index pertaining to capital market development and depth, the size of the domestic investor base, the macroeconomic situation and the institutional, regulatory and legal environment facing investors in financial markets. The economies of the 17 countries in the index together comprise approximately three quarters of Africa’s GDP. 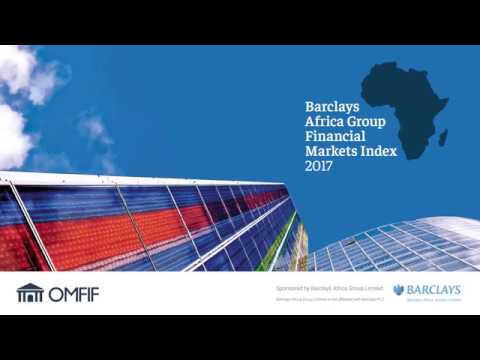 The report on the Index provides a wealth of valuable data and analysis which I believe will prove to be of great benefit both to investors and to economic policymakers in Africa. I would like to comment on some interesting points which emerge from the data incorporated into the Africa Markets Index and which are detailed in the Report.

A similar picture emerges with respect to the size of the domestic institutional investor base. South Africa has pension and insurance fund assets of $627 billion, whereas the median for the other 16 countries is only $6 billion (figure 4.3). It is clear that, with the exception of South Africa, capital markets play only a very small role in Africa as a source of financing for investment by the private sector, although capital markets have become more important for the financing of government debt.

Why is the South African capital market many times larger than those on the rest of the continent? It is not simply because the South African economy is larger than those of most of the other economies covered by the index. Valued in terms of US dollars, South Africa’s GDP comprises slightly less than 20 percent of the combined GDP of the 17 countries in the index, but it accounts for nearly three quarters of the total listed assets of the countries in the index and nearly 80 percent of the funds of pension and insurance companies.

It is also difficult to explain the dominance of South Africa’s capital markets in the region by macroeconomic factors (pillar 5 of the index). South Africa’s real GDP growth has been mediocre for many years and most of the other countries covered in the index have consistently recorded much higher rates of real economic growth. Three of the four economies which rank at the bottom of pillar 1 of the index, which pertains to market depth – Rwanda, Ivory Coast and Ethiopia – have been among the fastest growing African economies in recent years. The attractiveness of a financial market to foreign investors depends in part on the regulatory and institutional framework. Therefore, the African Financial Markets Index includes a number of pertinent regulatory and institutional factors, especially in pillars 2, 3 and 6 of the index. Although South Africa ranks highest amongst the 17 countries in the index with respect to each of these three pillars, the differences between South Africa and other top performers are not vast.

The primary reason why South Africa’s capital market is many times larger than those of all the other countries in Africa relates to the structure of the economy. The South African economy is characterised by large and medium sized companies, many of which have been operating for many years. These companies have the financial credibility to mobilise capital by issuing equity and bonds to investors on capital markets.

In addition, a large share of the labour force in South Africa is employed in the formal sector and is required to make regular contributions to pension funds, which explains why South Africa has a relatively large pensions and insurance industry. In contrast to South Africa, the economies of most other countries in Africa have a very different structure. They are dominated by informal micro and household enterprises and contain far fewer large and medium sized enterprises.

Consequently the number of companies which can credibly issue securities to raise capital is relatively small in these countries. To issue securities on the capital market, companies must have a solid track record of profitability and meet minimum standards of governance, with properly audited accounts and tax returns, but there are relatively few companies which meet these criteria in most African countries.

Furthermore, the vast majority of the labour force works in the informal sector with often irregular and precarious earnings and as such does not make regular contributions to pension funds. This is why their financial systems are dominated so heavily by banks rather than capital markets. The financing needs of small scale and micro enterprises cannot be met through market based instruments; instead these enterprises require loans from financial institutions, especially those which can specialise in serving this sector of the market.

Consequently, I would argue that the primary constraints to the development of capital markets in Africa, outside of South Africa, are structural in nature. On the supply side of the capital market, the main constraint is the paucity of large and medium scale companies which can credibly issue capital market securities. On the demand side of the market, the main constraint is the dominance of informal sector employment which impedes the growth of pension funds. These two constraints are linked, in that the relatively small share of large and medium sized companies in the economy accounts for the very limited scale of formal sector employment. This has important implications for financial sector policy. It suggests that, until these structural constraints can be alleviated, especially boosting the number of companies which can credibly issue capital market instruments to investors, policies which aim to improve the financial infrastructure and regulatory environment, or the taxation of financial instruments, to reduce the cost of capital market transactions and facilitate market entry, are unlikely to be effective in terms of stimulating rapid growth of the capital markets.

FDI can also contribute to the development of the domestic private sector, offering a market for inputs and through spill-overs of business, managerial and technical skills to domestic companies. Consequently, I would argue that the policy priority for Uganda, and for most other African counties, should be to mobilise much more FDI, especially in labour intensive sectors of the economy.

We also need to develop programmes to assist domestic companies to strengthen their management, governance and technical capacities so that they might expand and become more competitive and eventually be able to raise finance on local capital markets. In addition, we need to harness the potential in regional capital markets through integration of national bourses and harmonisation of laws and policies.

Finally, there is often a misleading narrative that African countries need to fix all distortions before receipt of capital flows. On the contrary, incremental changes benefit countries and an index such as this, is useful in prioritising policy and areas for correction.

The Writer is the Deputy Governor Bank of Uganda