Self-proclaimed National Resistance Movement (NRM) “general” Miguna Miguna was on Tuesday night ‘deported’ from Kenya to Canada.
Mr Miguna was put into a KLM flight departing Nairobi for Amsterdam minutes to 10 pm, his lawyer John Khaminwa said.
“We are reliably informed that Miguna Miguna has been forced into a KLM flight for “deportation” to Canada. Now, how do you deport a Kenyan? This Country has been overrun by criminals,” another lawyer Nelson Havi wrote on Twitter.
The official government newsroom said on Twitter, ‘‘Miguna is headed home. The court ordered he gets released and the interior ministry obeyed the orders and even assisted him with a flight ticket home’‘.
Interior ministry claims Mr Miguna denounced his Kenyan citizenship years back. Spokesman Mwenda Njoka said the lawyer never bothered to reclaim it.
“Mr Miguna denounced his Kenyan citizenship years back, acquired Canadian citizenship and never bothered to reclaim Kenyan citizenship in the legally prescribed manner neither did he disclose that he had another country’s citizenship despite being a lawyer who should have known better,” Mr Mwenda said on Twitter.
The account added that Mr Miguna ‘‘renewed his Canadian passport on 16th June 2017’‘.
It is not clear what law the government used to eject him from Kenya as the Constitution guarantees him citizenship since he is Kenyan by birth.
A senior govt official said that the Interior Ministry will give a detailed statement in the morning.
He said when Mr Miguna was arrested, the Canadian government had written to Kenya expressing concerns that their citizen was being harassed and they wanted him back.
Mr Miguna Tuesday narrated how he was held incommunicado for five days without access to his family or a lawyer following his arrest last Friday.
He said police officers humiliated him by locking him up in conditions “unfit for human existence.”
Mr Miguna was speaking at the Kajiado Law Courts where he was taken after his arrest last Friday on suspicion of taking part in a ceremony in which opposition Chief Raila Odinga was sworn in as the people’s president on January 30. 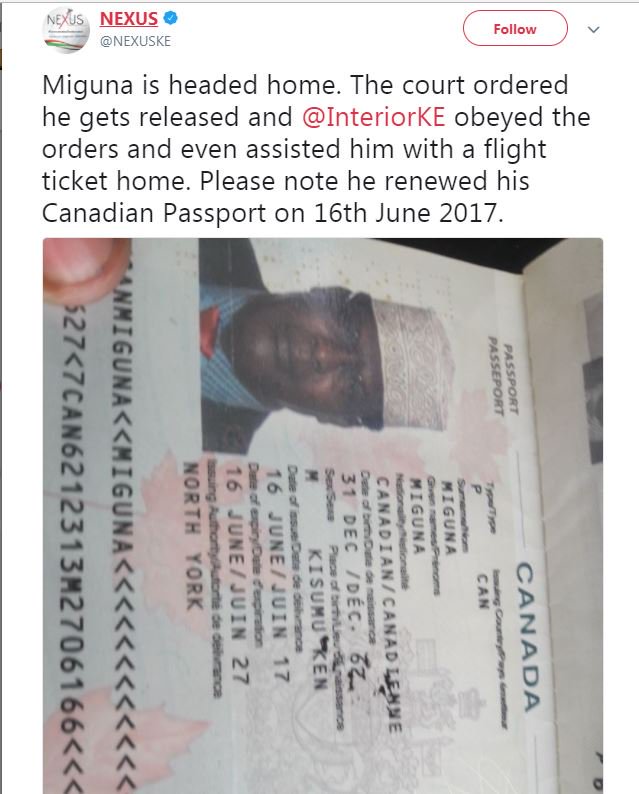 Reports of his deportation come hours after High Court Judge Luka Kimaru barred the Director of Criminal Investigations (DCI) and the Inspector General (IG) of the police from preferring any criminal charges against him.
The judge had earlier ruled that the Police IG and the DCI were guilty of disobeying court orders regarding his release.
While the court in Kajiado ordered that he be presented before Justice Kimaru’s court at Milimani, Mr Miguna was not produced in the court and his lawyers stayed late within the court’s premises waiting for his release.
He was arraigned in a court in Kajiado on Tuesday but did not plead to charges preferred against him.
Justice Kimaru had directed that police present him before court Wednesday at 11am.
KAJIADO COURT
The Kajiado magistrate had ruled that Mr Miguna be taken before Judge Kimaru in the High Court in Nairobi before 3pm Tuesday for orders on his bail terms.
He further directed that Mr Miguna appears before him on February 14 to take a plea.
This not likely to happen as the Nasa activist has now been ejected out of Kenya.
NASA SUPPORTERS RESTLESS
On Tuesday evening, Nasa supporters who had filled the Milimani courtroom were restless on whether he had been freed after Judge Kimaru ordered for his release.
The judge said he would not leave the premises until Mr Miguna was brought before him.
“I have been informed that he is in the building, so it remains that he is free,” the judge said before he walked out of the courtroom, leaving Nasa supporters shouting and demanding to see him.
CHARGE SHEET
The charge sheet against Mr Miguna alleged that he “was present and consented to the administering of an oath to Raila Amollo Odinga purporting to bind him to commit a capital offence of treason,” leading to fears among opposition supporters that the Nasa leader could also be arrested and charged with committing treason.
Following Mr Miguna’s arrest and failure to charge him in court, the Inspector-General of Police Joseph Boinnet and the Director of Criminal Investigations George Kinoti had been ordered to appear in court to explain circumstances surrounding their failure to release the Nasa activist.
Mr Miguna was arrested last Friday and on the same day High Court Judge James Wakiaga granted him a Sh50,000 bond but he was not released.
NASA ‘OATH’
The Directorate of Criminal Investigations then said Mr Miguna was arrested after he confessed to administering Nasa leader Raila Odinga’s ‘oath’ and for being a member of an illegal organisation – the National Resistance Movement (NRM).