East Africans living in the Europe will this year be treated to the East African European convention (EAFEC), one of the biggest social gatherings in Europe.

Happening for the first time, the theme for the event is based on promoting trade, housing and tourism for the community.

According to the organizers, the convention aims at bringing together the diverse East African Communities living in Europe along with friends of East Africa.

This is aimed at promoting the East African Community (EAC) and its puts special emphasis on benefits of the customs union, immigration and labour.

The convention’s president Beatrice Kayanja said that the event also intends to promote and encourage investment in property back home, East African tourism, create a platform for business; especially those with a target audience of East Africans living in the diaspora to promote their business, promoting bilateral trade between East African businesses and European businesses. 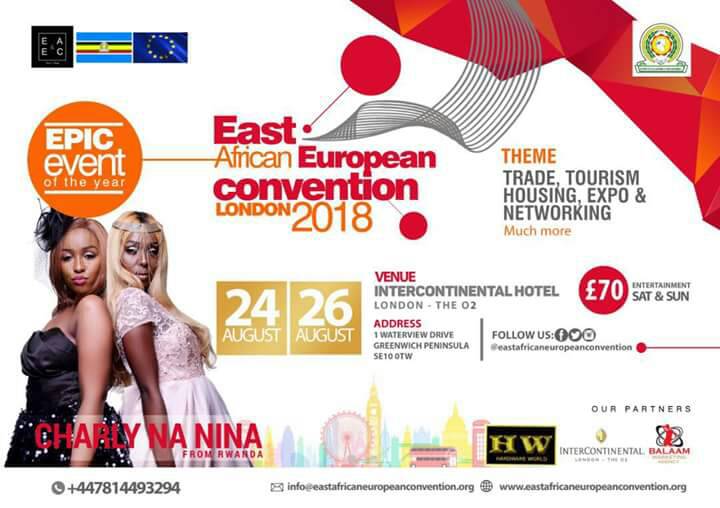 “Promoting the culture and benefits of saving back home through the purchase of bonds and securities or through the creation of saving and credit cooperative organizations (SACCO’s). Create and maintain a feel of togetherness among East Africans in the diaspora, especially the younger generations, irrespective of country of decent, race, religion, gender or age through the promotion of joint cultural and tradition activities, sports” reads the statement.
Meeting for three days of economic, cultural and social interaction, the delegates will be treated to expo and networking, boat dinner cruise, pool party, grand dinner, a London tour bus for visitors and entertainment from East African artistes.
To this effect, Kayanja has signed a contract with Rwanda’s singing duo Charly and Nina as the main performers. The duo’s hit ‘Owooma’.
According to Kayanja, they anticipate around 3,000 delegates and participants to attend the event over the three days. The convention is scheduled for August 24 between and August 26 at the Intercontinental Hotel, London.