In the third and last part of series by the EagleOnline Investigations Desk into the immense wealth of Justine Bagyenda, the immediate former Director for Supervision at Bank of Uganda, a property search carried out by the Lands ministry revealed she owns fifteen prime plots of land in Kampala city.

According to the Ministry of Lands Statements of Search signed on behalf of the Commissioner for Land Registration by Martha Komugisha on August 7, 2017; Diana Nambi on July 31; Joseph Kibande on December 13, 2017 and Elizabeth Kwesigabo on December 8, 2017, it was established that the pieces of land are in areas like Bugolobi, Makerere Hill Road, and the city center among other areas. 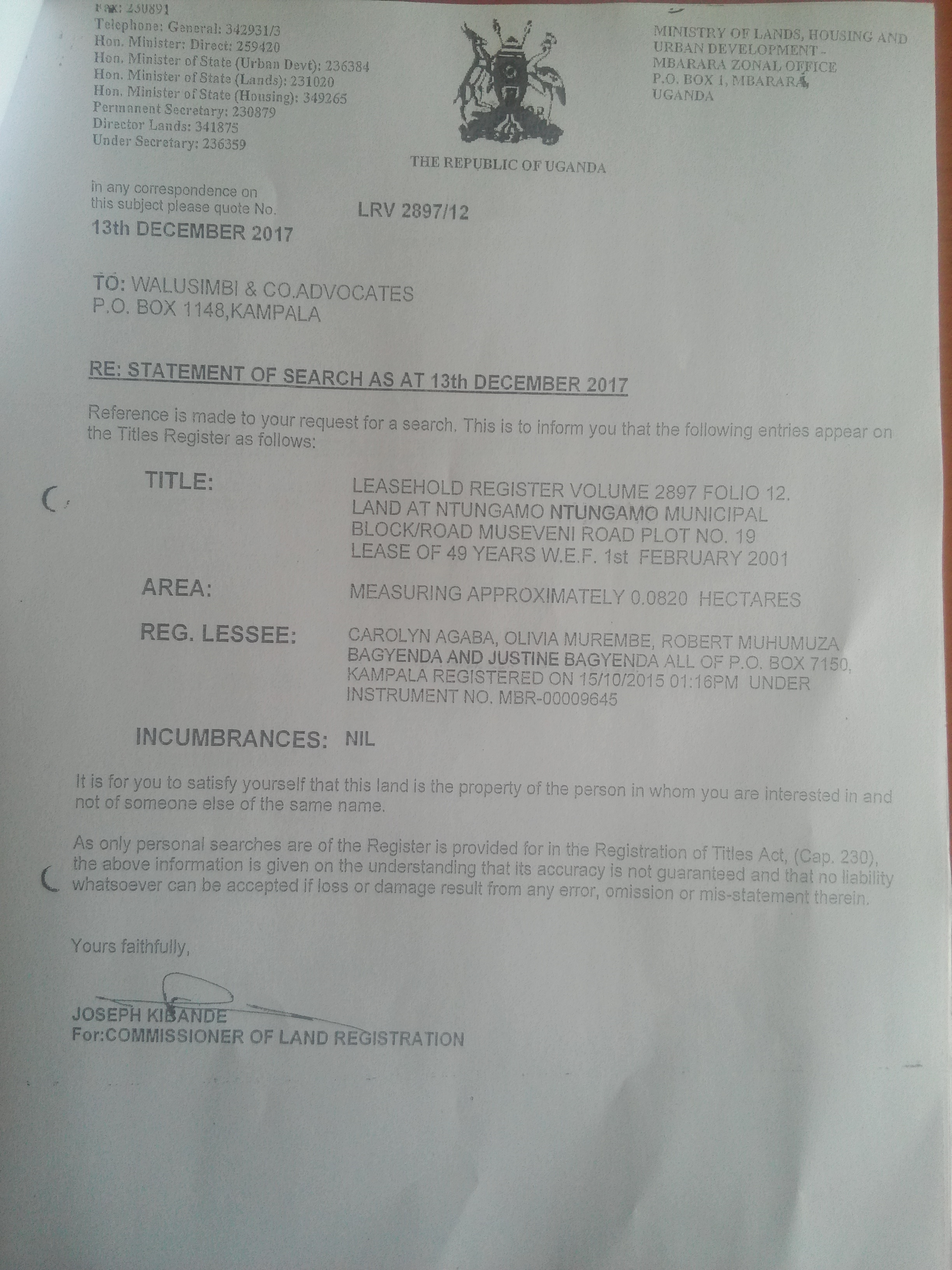 The statements also indicate she owns more prime plots in Ntungamo and Mbarara. Almost all the plots, with a total acreage of the land is 2.2719 hectares; 313.01sq ha in Kampala and 1.724 hectares located outside Kampala, have buildings on them. 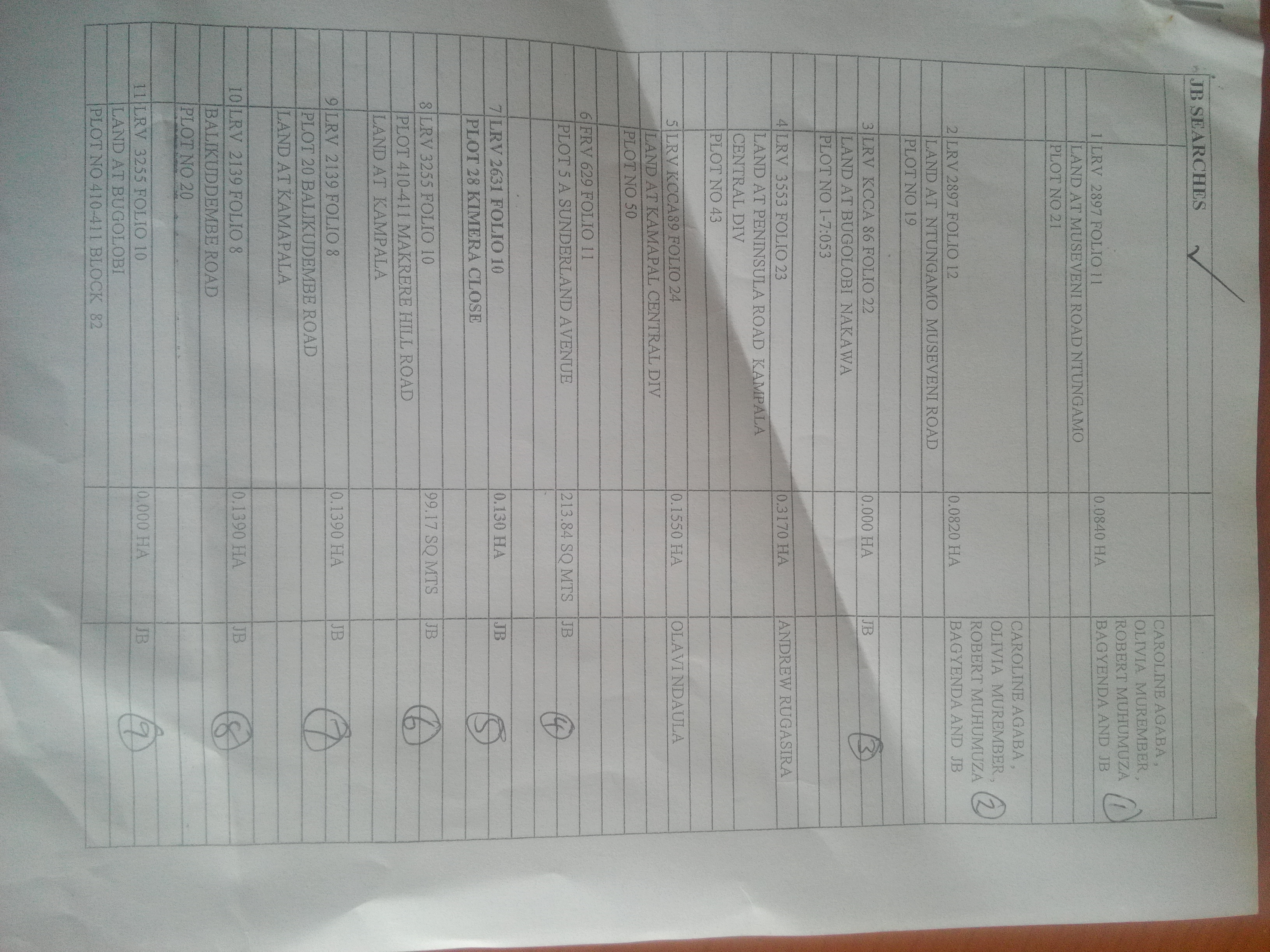 Among people mentioned by the Lands team as registered property owners are Caroline Agaba, Olivia Murembe, Robert Muhumuza Bagyenda for land at Mbarara Municipal on Kaguta Road, Olivia Murembe for land Ntungamo and Caroly Agaba for plot 1352 block 205 in Nakawa, while Justine Bagyenda was also named as the owner of Plot 5A Sunderland Avenue.

The search was requested from the above by among other interested parties, law firms Walusimbi and Co. Advocates and Anguria and Company Advocates, and individuals Jacob Katimbo, John Byarugaba, Paul Mugambe.

According to the statements, in Kampala the largest property owned by the embattled Bagyenda is 4.82 hectares in the National Housing Estates of Kiwatule at Block 20, plot 629 in Nakawa Division.

This is followed by land in Bugolobi totalling 1.243 hectares located at plot 28 on St. Kizito Close, also in Nakawa Division.

Further, according to the documents, the smallest properties are plot No. 410 to 411 Block 82 and plot No.1-7:053 both located in Bugolobi, in Nakawa Division, while others include prime plots 1547, Block 200 located in Munyonyo in Makindye Division.

Meanwhile, she also owns 1.724 hectares of land outside Kampala with 0.084 Plot No. 21 in Ntungamo along Museveni Road; 0.082 ha also in the same district and Plot No. 10 in Mbarara along Kaguta Road.

Bagyenda has been serving as the Director in charge of Supervision at Bank of Uganda and was recently retired from office which came alongside staff re- deployments.

Upon being sacked she was replaced by Dr Tumubweine Twinemanzi, who prior to that was serving as the Director of Industry Affairs and Content at Uganda Communications Commission (UCC).

Ms. Bagyenda, however, is said to have written to Prof. Emmanuel Tumusiime Mutebile, the BoU Governor protesting the manner in which she was laid off. In the letter, the sources say, Ms. Bagyenda told Prof. Mutebile she would return to BoU and continue with her work.

Yesterday, we also published another story of how Ms. Bagyenda, between 2015 and 2017, transacted Shs2bn on her account in Barclays Bank Kampala Road branch, with a serial beneficiary, one Kenny Muwonge.