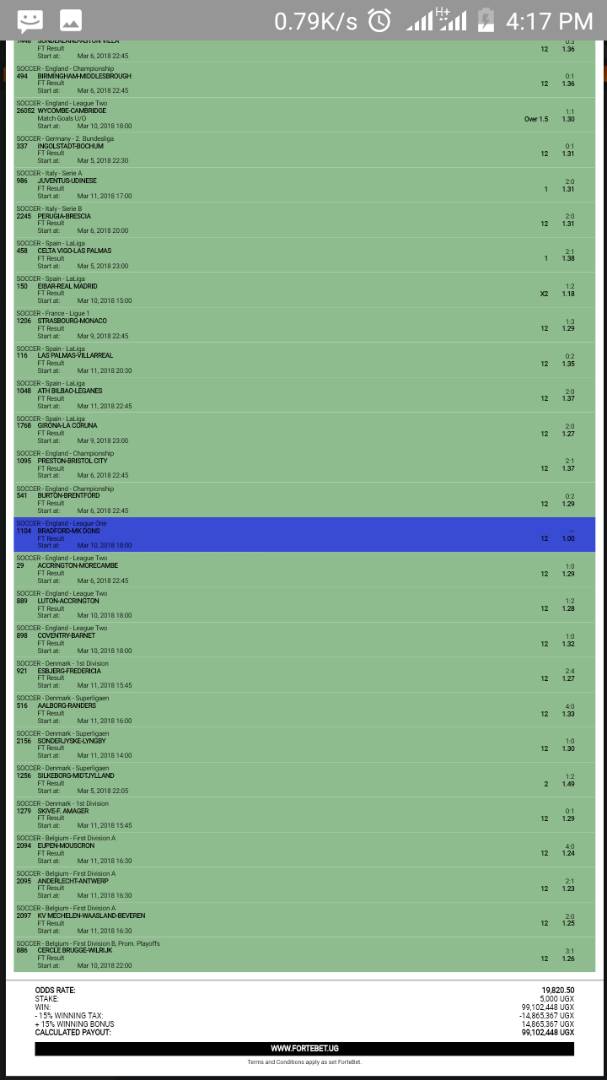 It did not end with the punter (client) who recently won Shs308 million after only staking Shs1000. Another punter has done it winning Shs99, 102,448 and guess what, after staking only Shs5000.
But how did this punter make it? Well, the trick was as very simple as selecting most games for either team to win (12). Out of the 37 matches that this punter selected, he predicted that 23 games would end without a draw and indeed it happened.
Under this prediction, he selected the following matches; Marseille-Athletic Bilbao and RB Leipzig-Zenit (Europa League), Sunderland-Aston Villa, Birmingham-Middlesbrough, Preston-Bristol City and Burton-Brentford (English Championship), Ingolstadt-Bochum (Bundesliga 2), Perugia-Brescia (Bendesiliga B), Strasbourg-Monaco (French League 1). Still under this either teams to win, he selected three matches from La Liga; Las Palmas-Villarreal, Ath Bilbao-Leganes and Girona-La Coruna.
He added on the following matches from English League Two; Accrington-Morecambe, Luton-Accrington and Coventry-Barnet. He went ahead to select matches (under the same prediction) from elsewhere as follows; Esbjerg-Fredericia and Skive-F.Amager (Denmark 1st Division), Aalborg-Randers, Sonderjyske-Lyngyby and Silkeborg-Midtjylland (Denmark Super League). He then selected other three matches from Belgium first Division A; Eupen-Mouscron, Anderlecht-Antwerp and KV Mechelen-Waasland and then Cercle Brugge-Wilrljk from Belgium first Division playoffs.
Away from either team to score, this punter also made another prediction. Here, he selected two matches from Champions League; both teams to score for PSG-Real Madrid and a draw or away win Tottenham-Juventus. 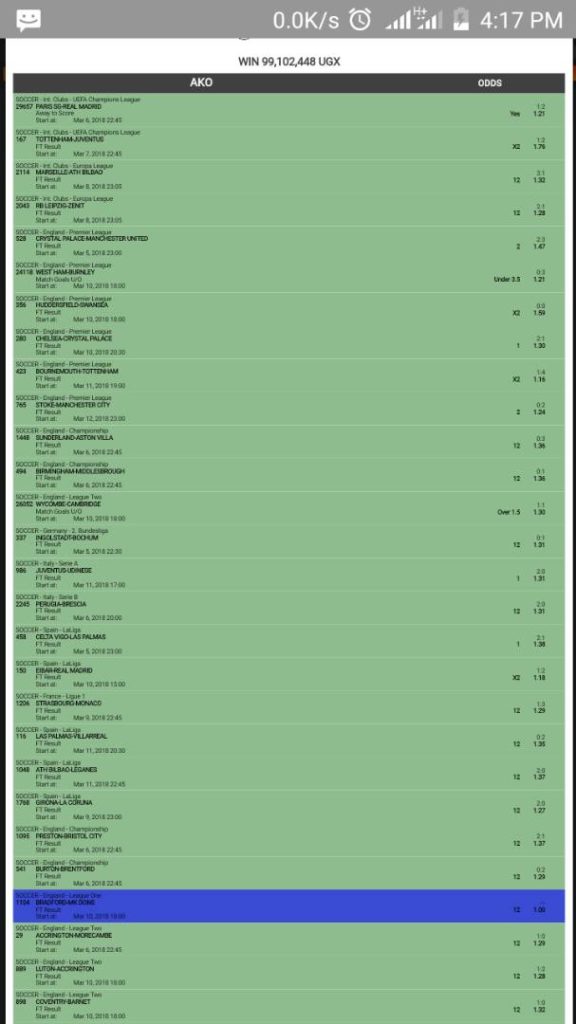 He also selected an away win for Crystal Palace-Manchester United, fewer than four goals for West Ham-Burnley, an away win for Huddersfield-Swansea, home win for Chelsea-Crystal Palace, a draw or away win for Bournemouth-Tottenham and an away win for Stoke-Manchester City (all from English Premier League). He too selected home wins for matches; Juventus-Udinese (Italian serie A) and Celta Vigo-Las Palmas (La lIga). This was in addition to-a draw or away wins for Eibar Real Madrid. This punter had also selected either teams to win in the match Brandford-MK Dons but it was cancelled. This ticket carried a total odd of 19,820 and it won. This money was paid out as soon as this ticket won. Congratulations! Do you want to also win big, try Fortebet today and put your luck to test? Remember you can only win if you place a bet.