By Our Reporter
Before its untimely sale to rival DFCU Bank, Crane Bank had lent clients net loans worth Sh700 billion as of October 20, 2016, according to a compiled financial report of the bank, showing that it was a key player in the country’s economy even though it was sold.
According to the leaked details of the customers contained in stolen book from former Crane Bank bosses, the asset base of Shs1.2 trillion at the time had bailed out 429 clients including individuals and companies even as its liabilities stood at Shs1.3 trillion against total equity and reserves of Shs130.9 billion. Customer deposits at the time amounted to a total of Shs977.2 billion 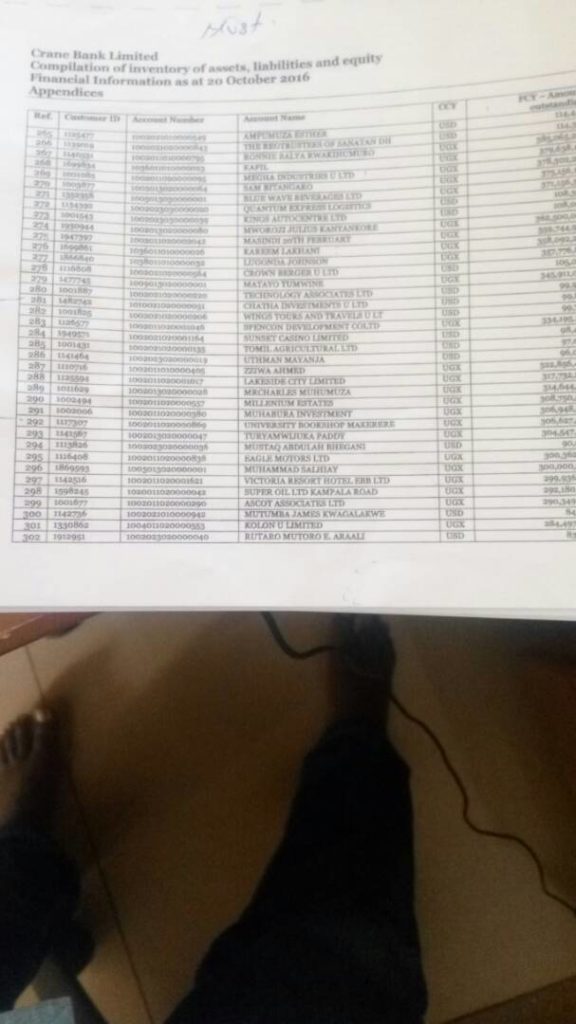 Data available shows big names, some politicians and businessmen who were servicing loans with the bank. Key among them include: New Vision’s Robert Kabushenga (Shs176.9m), Dr Ham Mukasa Mulira (Shs175m) and Henry Muganwa Kajura (Shs200m). Red Pepper’s Arinaitwe D. Rugyendo had a loan of Shs503.9m.
Other borrowers at the time included key figures like Patrick Bitature, former minister John Nasasira and businessman Robert Kabonero among others. Companies like Shumuk Investments, Harris International, Fountain Publishers and University Bookshop Makerere among others who took loans in hundreds of millions.
During the sale of Crane Bank then by the Bank of Uganda, shareholders argued that much as the liabilities were unfavorably, they were recovering debts from borrowers, something the central bank didn’t listen to. That was worsened as BOU handed over land titles of Crane Bank’s properties to DFCU. 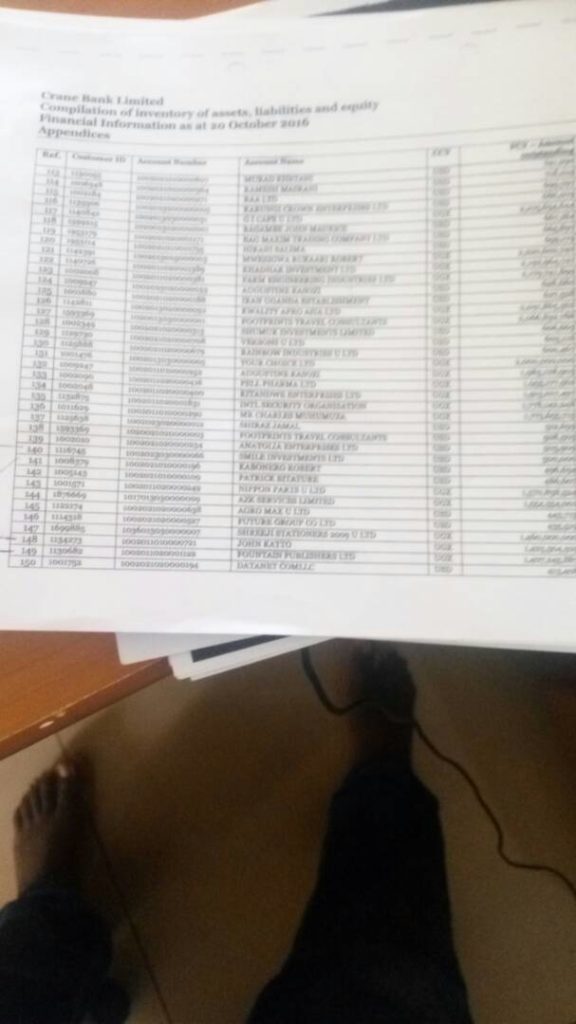 Crane Bank Crane was the fourth largest bank by the time it was taken over by the central bank with branches in all regions of the country, employing thousands in direct and direct jobs. At one point it was one the top taxpayers in the country.
More drama however ensued as DFCU Bank in mid-August announced net profits of Shs114 billion for the first half of 2017 year up from Shs23 billion in the same period last year.
DFCU attributed the profit majorly to the acquision of Crane Bank. The company’s balance sheet jumped t Shs3.05trn as of June 2017 from Shs1.8 trillon in December 2016. Its customer had numbers grow by 50 per cent in the period under review and its branch network grew from 43 to 67 with 100ATMs. But this was because it had acquired Crane Bank.
As DFCU celebrated its profit which was over 70 percent, sections of watchers in the public was wondering how a loss-making Crane Bank, as alleged by BOU, would turn around to boost profits of its rival within the shortest time. 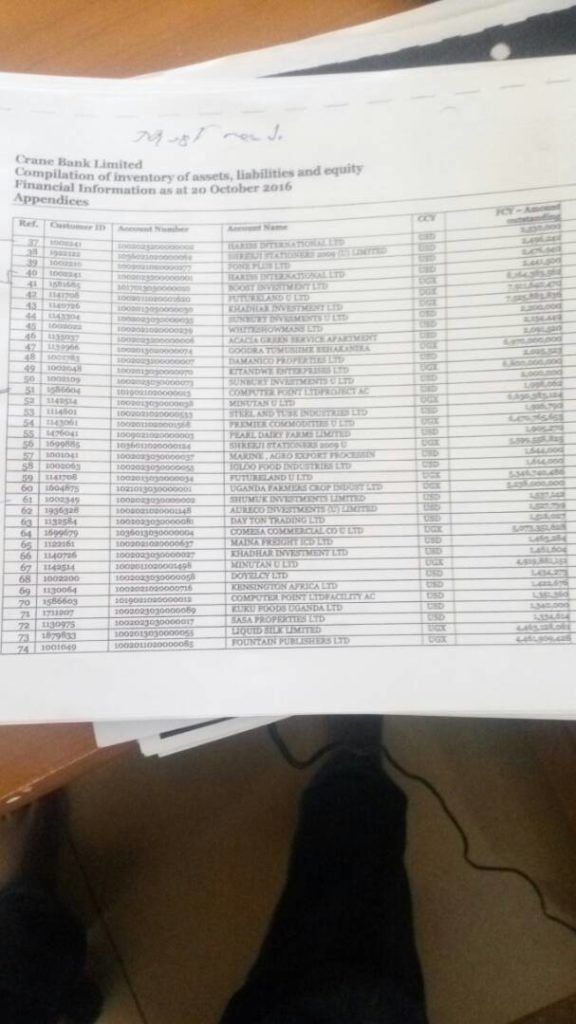 Some have argued that the sale of Crane by BOU was for reasons best known to Governor Emmanuel Tumusiime Mutebile and sacked director of Supervision Christine Bagyenda. Mutebile at one hinted Bagyenda whose job was to scrutinize performance banks had failed totrack Crane Bank, something that displeased Bagyenda. That shows the two top officials were not on the same page as Mutebile announced the sale of Crane Bank.
Court case
With Bagyenda now sacked, it is not clear whether she will be on the side of BOU in the case it accused Sudhir Ruparelia, the former Crane Bank proprietor, of taking out billions of shillings from the financial institution, causing its collapse. Sudhir denies wrong doing, arguing partly that at the takeover his bank, most of the money had been given out as loans as highlighted in the report. Sudhir blames BoU for flouting key terms of a Confidential Settlement and Release Agreement (CSRA) he signed with the central bank.
During that accounting period, Crane bank had balance with the bank of Uganda of Shs78.7b. But it also had balance and placements with other banks of above Shs10b.
Ownership 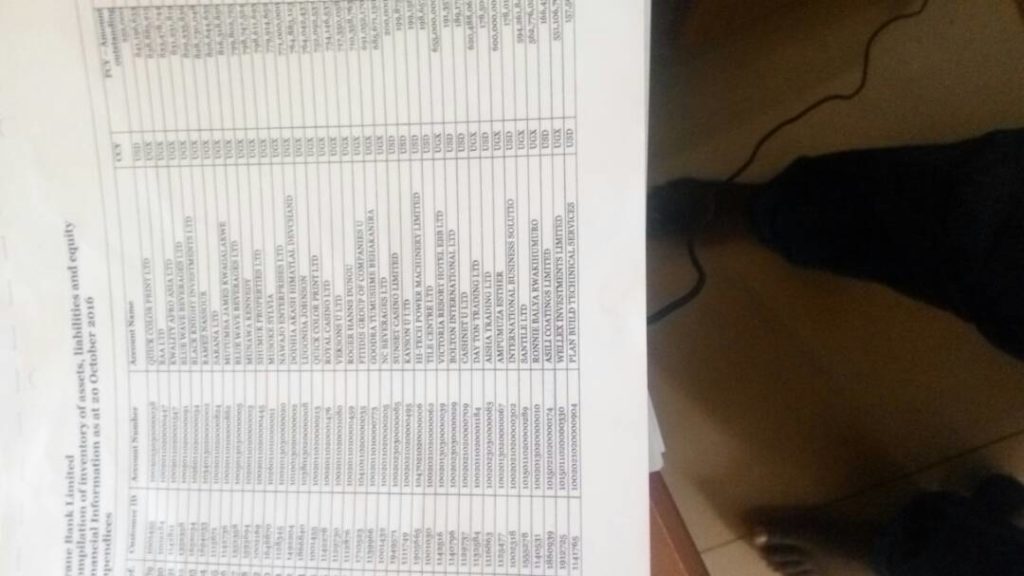 With a paid up capital of Shs210 billion, the bank was mostly owned by members of Sudhir Ruparelia family (6). Other shareholders were; White Sapphire Limited and Tom Mugenga, who had the least shares of Shs70, 014.
DFCU is partly owned by CDC, Rabo Development from the Netherlands and NorFinance from Norway who are shareholders in Arise B.V together with Norfund, a Norwegian government owned Private Equity firm and FMO, the Dutch Development Bank.