The Central Bank-Bank of Uganda (BOU) did not sell Crane Bank but only gave it freely to DFCU Bank as, Deputy Governor, Louis Kasekende confirmed in a recent speech he made in Kampala while addressing members of the Uganda Securities Exchange (USE).

But sources say BOU forcefully wrote off Shs600 billion so that they create negative capital, despite shareholders having a paid up capital of Shs350b.

But within the first six months of 2017 after taking over the assets of Crane Bank, DFCU reported a profit of Shs115 billion up from Shs31 billion the previous year. It attributed a huge jump in profits to acquision of Crane Bank assets.

A year later, in its latest financial results released on March 27, 2018 DFCU announced a net profit of Shs127 billion. The bank’s income also doubled over the period to Shs517.3b from Shs257.3 billion the previous year. While assets accumulation jumped from Shs1.8 trillion in 2016 to Shs3 trillion in 2017, and property and equipment from Shs67.1 billion to Shs142.6 billion

DFCU’s impressive financial report has raised eyebrows in the section of the public, asking questions as regards the quick sale of Crane Bank. That DFCU made huge profits after the takeover of Crane Bank is amazing.
What is disturbing the public is that DFCU did not pay cash for Crane Bank, according to the agreement it signed with BOU where it was agreed that it pays over ten quarterly installments over a period of two and a half years, moreover interest free. 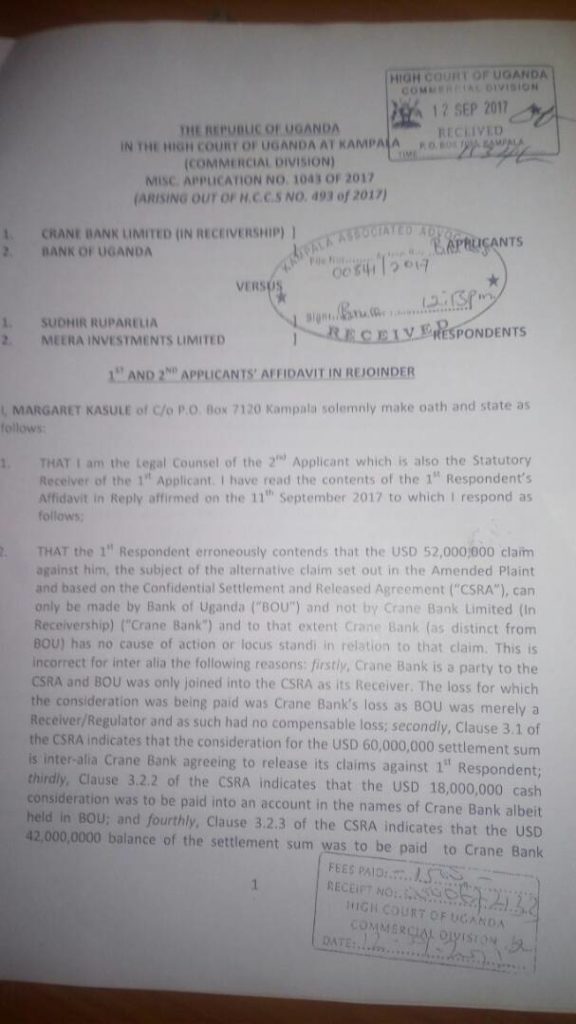 The Crane Bank takeover has been described by some people as asset grabbing by government. Amongst the assets, Ruparelia Sudhir’s lawyers are pointing at the Shs100 billion Crane Bank branches, which legally belonged to Meera Investments Limited which is under Ruparelia Group and had been leased to Crane Bank.
Sudhir’s lawyers say that the terms of the agreement between BOU and DFCU were agreed fraudulently and secretly in documents outside the main sale agreement.

“The net result of these fraudulent side deals was that DFCU got a bank with Shs1.3 trillion of Assets for a net payment of just Shs200 billion (payable under side deals over a period of about 3 years),” reads a memo written by Sudhir’s lawyers, adding that was detriment of the shareholders and other legitimate creditors. That also the deal benefited DFCU and the BOU officials and their transaction advisors.

That a side there is the issue of the cost to innocent taxpayers when BOU sold some liabilities and equal amount of assets to dfcu Bank despite other buyers interested in buying the bank as a whole and on better terms.
BoU Legal Secretary, Margaret Kasule saw an affidavit in support of BoU saying Crane Bank had never made any loss.
“That I am the legal counsel of the 2nd applicant which is also the statutory receiver of the applicant. I have read the contents of the 1st respondent’s affidavit in reply affirmed on September 11, 2017 to which I respond as follows;

“That the 1st respondent erroneously contents that the $52,000,000 claim against him, the subject of the alternative claim set out in the amended plaint and based on the confidential settlement and released agreement (CSRA), can only be made by Bank of Uganda and not by Crane Bank Limited in the receivership” (Crane Bank) and to the extent Crane Bank (as distinct from BoU) has no casue of action or locus standi in relation to that claim.” Reads Kasule’s affidavit.

Former Executive Director in charge of Supervision Justine Bagyenda in her January 25, 2017 letter to DFCU Managing Director which was titled, compliance accommodations, says “The non- performing loans and advances acquired by DFCU will be managed and reported on separately from DFCU’s pre-transaction balance sheet for a period of at least 12 months”