Former UN Secretary General Kofi Annan has asserted that the current poor state of Africa is as a result of old aged men in power.

According to the respected former UNSG, leaders in Africa should embrace the notion of leaving office while aged around 70 years.

“Africa has great values to depend upon, Africa could be independent, but we have too many old men at the presidency, some are above 70 years, and what do you expect them to do?” Annan said at the just-concluded world changers summit which was held in Namibia.

The Ghanaian peace icon added: “African politicians must learn to retire at a minimum age of 70 years, but rather we have packed old men in our leadership, how could we move forward. Some are even above 80 years and still ruling.” 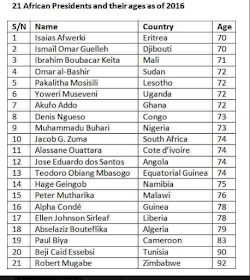 According to a list released, in 2016 Africa had 21 Presidents aged above 70 years including Uganda’s Yoweri Museveni, who is now aged 74.

Last year Parliament amended Article 102 (b) of the Constitution and removed the age limit cap of 75 years, meaning that Mr. Museveni can contest for presidency in the next elections scheduled for 2021.