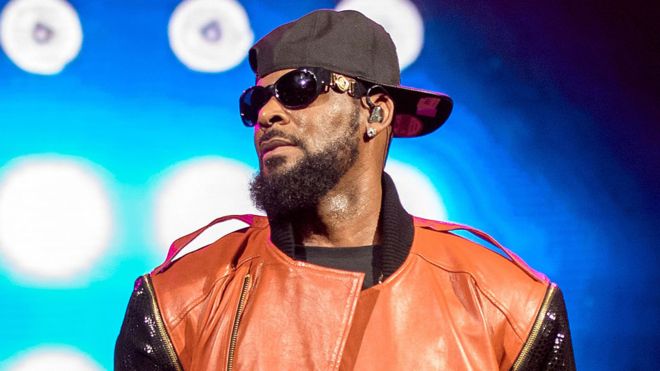 Faith Rodgers says she was mentally, physically and verbally abused by R Kelly, who she was in a relationship with for almost a year, according to the lawsuit filed yesterday.

A representative for the singer said in April that he “categorically denies all claims and allegations” in the lawsuit.
In an emotional interview with the BBC, Faith described R Kelly’s alleged sexual misconduct.

In May 2017, Faith says R Kelly flew her to New York to attend one of his concerts. She says she received a phone call at 6am from the singer, who came to her hotel room and ordered her to take off her clothes.

She describes his behaviour towards her as “really aggressive” and says she “froze up” when R Kelly attempted to initiate sexual activity.
“I told him that I wasn’t ready for sex, that I don’t engage in sex the first time I meet somebody – that’s not who I am, that’s not what I’m comfortable with,” she says.

Faith claims the singer then shrugged his shoulders and responded that he was “at his best” when he was “wanted”.
At that point, she says she thought it had been established that she didn’t want to have sex with him.

R Kelly then began rubbing Faith’s back like he was “rubbing a countertop”, she says.

She claims he went on to initiate sex with Faith while saying “nasty [and] degrading things” to her. Faith also claims that R Kelly referred to himself as “Daddy” and called her “his little doll” during the encounter.

In recent months, R Kelly has faced numerous sexual misconduct allegations by former girlfriends.
A #MuteRKelly movement established in July 2017 calls for a boycott of the Grammy Award-winning singer’s music and concerts. The singer has consistently denied any wrongdoing.

In a statement issued in April by R Kelly’s management, he called the string of allegations – and the subsequent backlash from the Time’s Up movement – “a greedy, conscious, and malicious conspiracy to demean him, his family and the women with whom he spends his time”.

Music streaming services, including Spotify and Apple, have removed R Kelly’s songsfrom some of their playlists, and a petition calling for a “worldwide mute” on the singer has attracted more than 70,000 signatures.
In the interview, which is one of several with R Kelly’s alleged victims as part of a new BBC Three documentary, Faith claims that the singer forced her to perform oral sex and endure humiliating sexual encounters.

She describes one of those encounters, which she says took place at a concert.

“It was backstage and they were calling him to come on stage; he wasn’t worried about it. He pulled my pants down, bent me in front of a mirror, he had me by my neck and he just penetrated me and started having sex with me.

“It was rough. It hurt,” she says.
Faith claims she discovered that she had contracted herpes.
“I was devastated,” she says. “I was embarrassed; it’s not something that’s going to go away.
“The hardest part was coming clean to my family about everything […] I blame myself a lot.”
On other occasions, R Kelly instructed her to perform sexually while he filmed her on his iPad, she claims.

“He turned on all the lights, pulled out his iPad, and told me to get naked. He was demanding that I do stuff on camera that I wasn’t comfortable doing whatsoever.”
During their relationship, Faith says R Kelly also asked her to sign a contract that he said would offer him “protection”. She did not sign the agreement.

Faith says she was introduced to a circle of women who R Kelly described as his “family”, and who all referred to him as “Daddy”. She says they followed a series of rules set by the singer like standing up, walking to him and kissing him on the mouth whenever he entered the room.
She describes some members of R Kelly’s inner circle as “puppets” who have been brainwashed.

“He’s the master and they’re his slaves,” she says.
R Kelly was contacted about the issues raised in this interview, but BBC Three received no response.