Pastor Robert Kayanja of the Miracle Center Cathedral has spoken out on allegations of fleecing over Shs5 billion from youths that are leveled against him.

Hours after a letter addressed to him over the same matter went viral on social media, Kayanja has called a hasty press conference Friday where he denied the allegations.

“I would like to refute the information projected in the document thus of malice and defamation to Robert Kayanja, Miracle center cathedral and Version 86 (youth national transformation). Version 86 is a registered youth organisation that was started to mentor, sponsor and empower youth that were born from 1986 up to date,” he said.

According to a letter dated May 15, issued by Rwakafuzi & Co Advocates on before of hundreds of thousands of youths, it’s said Kayanja mobilised them through Miracle Center Cathedral’s ‘Version 86 for Youth transformation’.

Through the initiative, Kayanja asked them to group themselves and that each group should pay Shs500, 000 contributed equally by each group member. 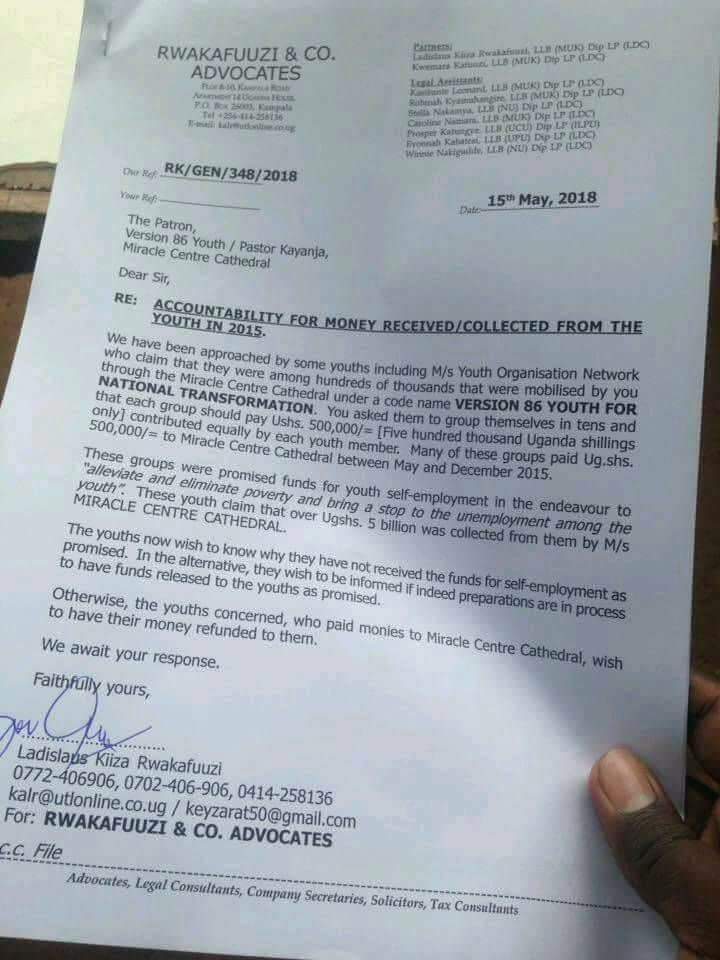 Many groups paid this money between May and December 2015.

In return, these groups were promised funds for the youths self-employment in the endeavour to “alleviate and eliminate poverty and bring a stop to the unemployment among the youths”.

According to the letter, over Shs5billion was collected from them by M/S Miracle Center Cathedral.

“The youths now wish to know why they have not yet received the funds for self-empowerment as promised. In the alternative, they wish to be informed if indeed preparations are in process to have funds released to the youths as promised. Otherwise, the youths concerned, who paid monies to Miracle Center Cathedral, wish to have their money refunded to them.”