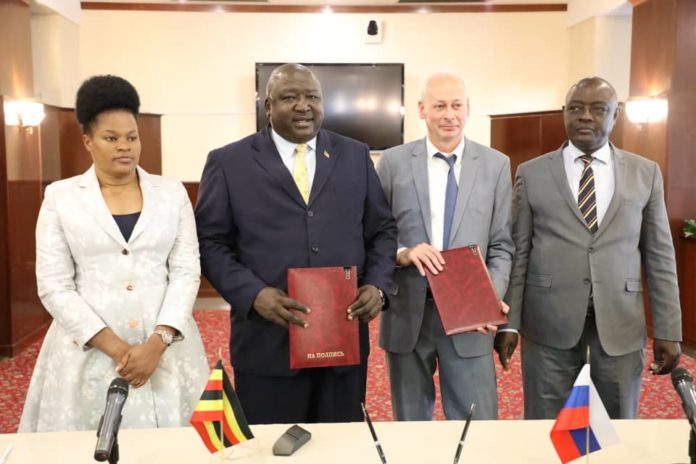 KAMPALA: The Russian government has promised to give high end- to- end encryption equipment to help security agencies protect the transmission of intelligence.

Security equipment will also be installed at strategic facilities like airports and power plants.

According to the statement issued by Foreign Affairs, the Russians also promised during a meeting in Moscow Wednesday between the Ugandan delegation led by Foreign Affairs State Minister Okello Oryem and Russian officials says that Russia agreed to supply Uganda anti-drone systems.

“Peacemaker international security center is ready to supply Russian-made autonomous voice notification kits for alerting the population in emergency situation and during mass events within up to two kilometers range as well as providing Russia ant-drone system equipment for the protection of civilian objects of critical infrastructure from unmanned aerial vehicles,” the statement reads.

The Russians also promised to give Uganda encryption technology to ensure Uganda’s security information is safe.
The statement also said there is a need to introduce video conference communication platform for Uganda People’s Defence Forces and cameras for police.

During the session, both parties welcomed an agreement between the Russian developers and PROTEI, a leading Russian IT company, Uganda Telecom [UTL] and K2 telecom to start working on Wi-Fi offload.

They also discussed the Memorandum of Understating that was ratified by the Russian state-owned nuclear energy State Atomic Energy Corporation [Rosatom] and the ministry of Energy and Mineral Development of Uganda on the use of atomic energy for peaceful purpose that was signed in Moscow June last year.

They commended the beginning of practical cooperation regarding the possible supply of the Russian civil equipment to Uganda.
In education sector, the Russian government promised to create favorable conditions for learning Russian language in Uganda and modern telecommunications technology.