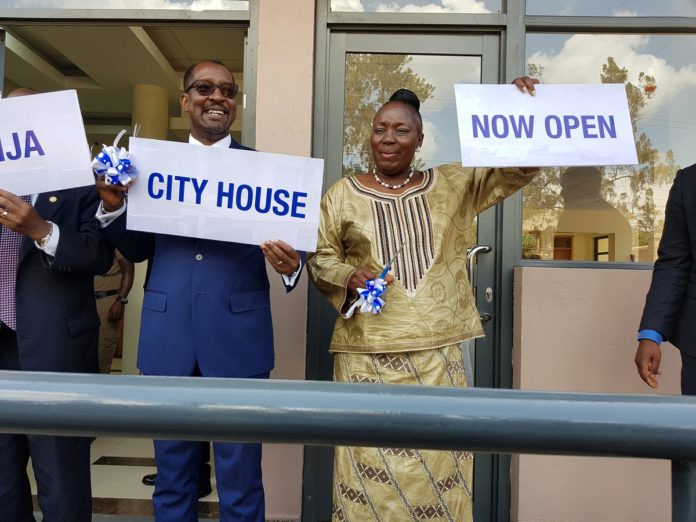 The three-storied building Jinja City House, located at the heart of the town has a total built up space of 1500 square meters of which 1200 square meters will be rented out with some space left for to house its offices.

It is a mixed use development with commercial facilities, office space and retail shops

The NSSF management have been investing some of its savings (6 percent) in real estate projects.

Their other real estate projects include the Mbuya 1 & 2 project valued at Shs14.9 billion which will be completed in two months, Lubowa housing project that kicked off last September, Mbarara mixed development project that is projected to be completed by end of this year.

Addressing guests at the launch, the Fund’s Executive Director Richard Byarugaba said the project “is a step towards realizing the fund’s real estate strategy, focused on creating value for its members through constructing commercial buildings and housing estates in major towns in Uganda.”

“He said NSSF despite such development continues to provide long term credit to the localprivate sector. “We are contributing to the growth of the economy by providing long term capital for the private sector,” he said.

He urged to the government and Parliament to fast track the bill that will reform the NSSF Act so that it can cover more Ugandans.

The Speaker of Parliament, Rebecca Kadaga who was the guest of honor lauded NSSF for investing and contributing to economic development of major towns especially Jinja town.

She said she would support the Social Security Bill as soon as it appears in Parliament.

“I am aware that cabinet recently passed a resolution to amend the existing NSSF act to extend social security covered to more Ugandans who are not covered under the existing law. I look forward to receiving this bill and will talk to concerned parties to make sure it is tabled in time,” she said.

The Chairperson NSSF Board, Patrick Byabakama Kaberenge said the completion of the Jinja City House and the other upcoming real estate projects would go a long way in covering the housing gap in Uganda.

NSSF is currently one of the biggest pension fund in Africa in terms of total assets, with an estimate of Shs9.498 trillion.

The Fund has invested in three major asset classes, 77 per cent in fixed income, 17 per cent inequities and 6 per cent in real estate. Currently NSSF pays 11.23 per cent in interests to its clients.