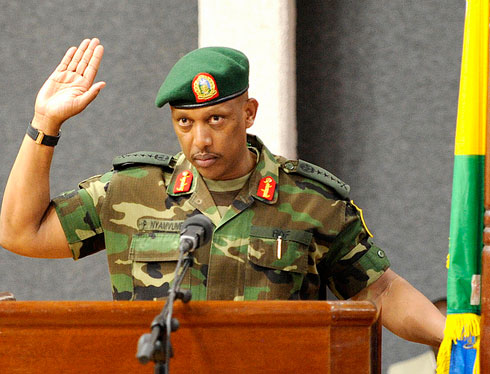 Rwandan President and Commander in Chief of armed forces Paul Kagame has made changes in the army.

Maj. Gen. Kagame has turn J2 section into Defence of Intelligence Department; it is responsible for military intelligence. He has respectively appointed and promoted Lt. Col. Andrew Nyamvumba to a rank of coloniel and made him head of the department.

“H.E The president of the Republic and Commander-in-Chief of Rwanda Defence Force (RDF) has made the following promotion, appointment and structure changes in RDF:
The J2 Department becomes Defence Intelligence Department. Lieutenant Colonel Andrew Nyamvumba has been promoted to the rank of Colonel and appointed the Chief of Defence Intelligence (CDI).” Reads the message from RPF.

The elevation and changes come at the time when Rwanda was attack by hilitants in Nyungwe forest that overlaps the Rwanda-Burundi border.
Last week while at the commissioning ceremony of cadet officers at Rwanda Military Academy, Gen. Kagame said Rwanda Defence Force is ready for war.

“You are given the training and knowledge to protect the sovereignty of our nation, to fight wars and keep Rwandans safe,” said Kagame, emphasizing, “It is an important responsibility.”