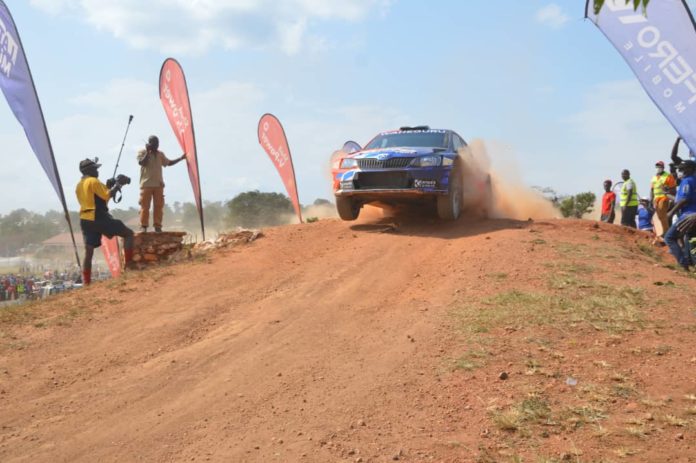 Manvir Baryan made an easy meal of the local competition by winning the Pearl of Africa rally 4.08 minutes ahead of second placed Ronald Sebuguzi and 11.02 minutes off 3rd placed Jas Mangat over the weekend.

The 2 Day rally kicked off with a Spectator special stage at Busika in Luwero district and competitive stages in Kayunga, home of the Sugar Corporation of Uganda (SCOUL) plantations. Manvir led day one on 8:53 minutes with Jas Mangat and Ronald Sebuguzi in 2nd and 3rd on 8:53 and 8:57 minutes respectively.

Day 2 continued as an all Manvir affair when he won all but 1 of the stages of the rally when he missed a turn and lost 5 minutes trying to find his way back to the right track.

On how he missed the turn, Navigator Drew Sturrock said “we came down a fast stretch and got caught in our hanging dust because of the winding and turning through the plantation. So we over shot the right turn and took the wrong one”.

Earlier in the morning the crew of Jas Mangat/Joseph Kamya also missed a turn in stage 3 and lost 5 minutes. “Some turns were too close and not taped off, we took the wrong one, made a couple of correct turns and ended up at a dead end, finding our way back cost us valuable time” said Joseph Kamya. Interestingly the crew got lost in the same stage again on the second loop.

In the NRC race, the crews of Ronald Sebuguzi/Leon Senyange, Jas Mangat/Joseph Kamya and Alwi Hassan/Enoch Orlinga topped the podium places. Meanwhile, Innocent Bwamiki from Team WID in an EVO 7 not only finished his first event but also won the CRC category.

“This pearl rally was not as exciting as we had expected don’t know why, maybe the heat, dust and high drop_out rate of cars, but we found it a bit dull “said Isma, a rally fan and supporter of Ambrose Byona.

Of the 48 crews that started, only 22 managed to finish. Those that suffered mechanical issues included 2017 champion Fitidis in stage 8, 2015 2WD champion Waligo in Stage 9 and crowd sensations peter Kalule/Mariam Nambasa in Stage 2 and Unisan Bakunda.Umar Kakande in Stage 4.2015 NRC winner Arthur Blick in Stage 7.