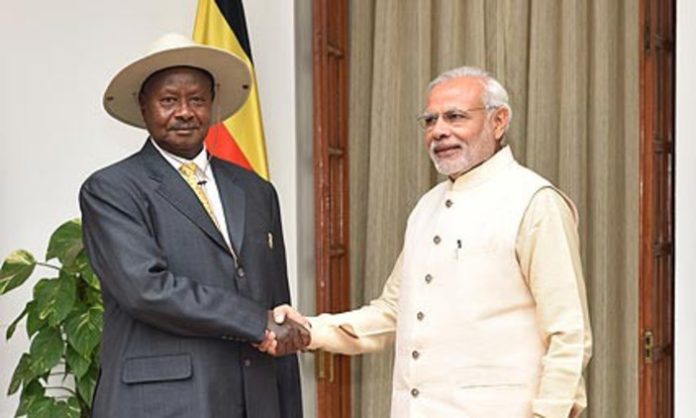 President of Uganda Yoweri Museveni and the Indian Prime Minister Shri Narendra Modi have agreed that the terrorism poses a grave threat to global peace and stability and reiterated their strong commitment to combat it in all its forms and manifestations.

The two leaders made the commitment on Tuesday at Entebbe State House where Museveni hosted a state banquet in the honour of the visiting Prime Minister.

Modi will address the Ugandan parliament today, an event expected to be telecast live in India and many African countries. This will be the first time that an Indian Prime Minister has addressed the Ugandan Parliament.

They stressed that there could be no justification for acts of terror on any grounds whatsoever.
The leaders asserted that strong measures should be taken against terrorists, terror organisations, their networks and all those who encourage, support and finance terrorism, or provide sanctuary to terrorists and terror groups.

They also underscored the need to ensure that terrorist organizations not get access to any Weapons of Mass Destruction (WMD) or technologies and committed to cooperate for the early adoption of the Comprehensive Convention on International Terrorism (CCIT). The leaders agreed on the need to closely engage with regional and international issues of mutual interest and concern.

Both countries have over the past decades been hit by terrorism activities, the highlighting in Uganda being in 2010 when fans watching World Cup finals in Kampala were killed by bombs planted by Al Shabaab terrorists.

The government of Uganda considers the Allied Democratic Forces (ADF) and the Lord’s Resistance Army (LRA) as terrorist organisations even though they now operate out of the country.

The two leaders reaffirmed the need for a comprehensive reform of the UN Security Council, including its expansion, to make it more representative, accountable, effective and responsive to the geopolitical realities of the 21st century.

They reiterated their commitment to intensify their cooperation in the United Nations and other multilateral organisationsin order to address current global challenges such as climate change and to foster international and regional peace and security, as well as sustainable development.

Yesterday a business event jointly organised by the Private Sector Foundation of Uganda (PSFU) and Confederation of Indian Industries (CII) was addressed by both the Principals. Prime Minister Modi also addressed a large gathering of Indian Community in Uganda at a special event organised for this purpose.

UNBS carries out exercise to verify quantity and safety of Liquefied...