Hundreds of Rwandan opposition supporters have stormed Sandton streets in Johannesburg to protest the visit of Rwandan President Paul Kagame.

BRICS member states include; Brazil, Russia, India, China & South Africa.
And President Kagame’s presence, according to members of RNC was merely an endorsement of his gross violation of human rights and suppression of opposition in Rwanda.
Kagame is not welcome here, the RNC protestors chanted in a thunderous chorus.

“It is the only opportunity to arrest this criminal who has massacred millions in DRCongo, distabilised neighbouring countries and whose jails in Rwanda are full of political prisoners. He is not welcome,” the RNC Secretary for South African Chapter Ms Jennifer Rwamugira is quoted.

The Rwandan Head of State, she noted, was a symbol of tyranny and terror and there “has no place not just at BRICS Summit” but also at any other international fora.
“Considering his track record of violating human rights, abuse of democracy and other fundamental freedoms in Rwanda and suppression of Press President Kagame should be stepping down and facing the full force of the law. He has also killed his opponents here in South Africa and he should be facing trial over those atrocities,” Ms Rwamugira added.

The protestors also presented a statement to South African Ministers, Hon. Gugile Nkwinti (Rural Development and Land Reform) and Hon. Thulas Nxesi (Sports) in which they askedc government to arrest the Rwandan leader.

“In short President Paul Kagame is a terrorist president and the worst criminal president in office today and welcoming him to this beautiful democratic country South Africa would be abusing the memory of our iconic late president Mandela and tarnishing the beautiful image of South Africa,” the statement reads in parts. 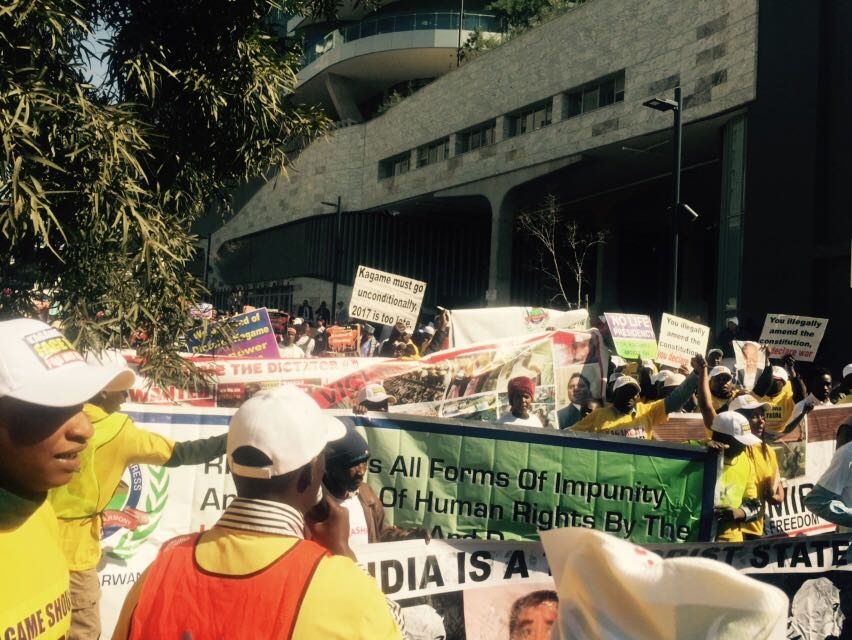 It adds: “We therefore call upon all peace loving human beings to come and stand together against this tyranny of times president Paul Kagame of Rwanda and save humanity”.
The South African Ministers have pledged to respond to the matters raised in due course.
Nevertheless, President Kagame also accuses those that are plotting against him for working for foreign interests that seek to disestablish his reign.