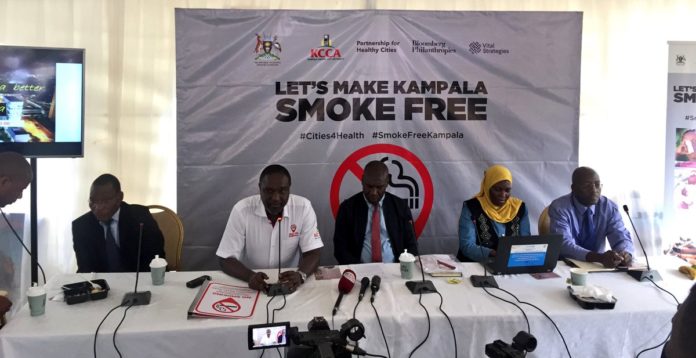 Kampala Capital City Authority has prohibited smoking in public, work places and near any means of public transport saying the initiative is aimed at reducing on the number of premature deaths, infertility rates, lung cancer and others.

Speaking at the launch, Kampala Central Municipality Mayor Charles Sserunjogi revealed that KCCA is implementing Tobacco Act of 2015 that bans smoking in public places and advocating for every person’s right to a Tobacco Free environment.

With the majority of the country’s population living in urban settings, he said, cities are uniquely positioned to transform the fight against diseases and injuries by implementing policies to significantly reduce exposure to risk factors.

“Smoking is strictly forbidden in, or within 50 meters of any public place, workplace, or near any means of public transport, there will be no more designated Smoking Areas or zones in Kampala,”

He said KCCA is committed to sensitizing the public about the dangers of smoking and its impact on people’s health and create more awareness about the Tobacco Act 2015. “We call upon the general public to report all cases of tobacco use in public places on our toll free number 0800990000,”

“Health is at the forefront of what KCCA does and carrying out such initiatives highlights some of the strategies that the Authority works on in order to transform Kampala into a better city,” Sserunjogi said.