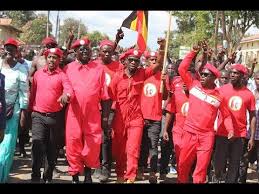 Last night chaos engulfed Dourcus Inzikuru Street as Special Forces command (SFC) soldiers and police battled crowds led by MP Kyagulanyi and many of colleagues who were in procession after holding final rally of Independent candidate Kassiano Wadri ahead of tomorrow’s by-election to fill vacant seat for Arua municipality following the assassination of MP Ibrahim Abiriga by unknown hooded gunmen.

“We caution public to obstruct and or attack president’s motorcade saying the act contravenes traffic and road safety act and some provisions of panel code act, our readiness to secure the elections tomorrow is on standby,” he said.

He implored voters to exercise the constitutional and democratic rights to vote their preferred candidates.

He said the scuffle started when President Museveni was going to Boma grounds for the final rallies, he was met by a tractor that had the red ribbons. When leaving the grounds, he was then met with Wadri’s supporters at Trans-junctional road.

He said both the tractor and Tundra registration Number UAJ 416K were towed to Arua central police station and the body of Kyagulanyi’s driver Kawuuma Yasin was taken to Arua hospital.