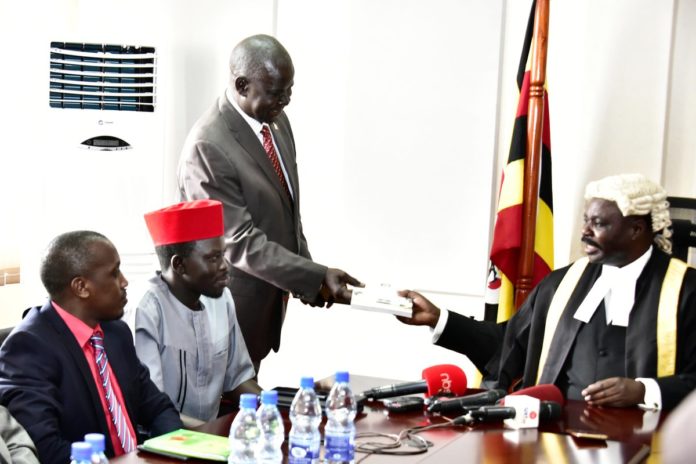 Kassiano Wadri has been sworn in as Arua Municipality Member of Parliament days after he was freed by Gulu high Court judge Steven Mubiru.

Kassiano Wadri was arrested on Augusts 13 hours after holding their conclusive rallies head of the Arua by-election. He was nabbed along with Robert Kyagulanyi, Ntungamo Municipality MP Gerald Karuhanga, Jinja East MP Paul Mwiru, former MP Michael Mabikke, and 28 other, the group is battling with charges of treason and malicious damage of president’s car.

The ceremony took place in the Deputy Speaker’s boardroom, where Jacob Oulanyah welcomed him to the August house. “Today we receive our newest MP in Parliament, This gives us some confidence that things can still go well,”

Jacob Oulanyah who doubles as Omoro County Member of Parliament said MP Wadri’s election is a manifestation that Ugandan government systems still works that even with the charges that were levelled against him, he has been able to swear in to serve his people.

Despite swearing in to serve Arua electorates, according to stringent terms that were issued by Gulu High court judge as he was granted bail, Wadri will not allowed to step in Arua for a period of three months without authorization from court.

In his remarks, Wadri said wishes of the people of Arua to have a representative in Parliament have been achieved.

“Arua made history, they elected someone who was confined behind bars, I owe them a lot of gratitude, my colleagues who stood by my side amidst the hostile environment and the state machinery, it is only God that can reward you,” he said.

Despite standing on an independent ticket, Wadri is a member of forum for democratic change (FDC), the main opposition party in Uganda. He served in the 7th, 8th and 9th Parliaments of Uganda as the opposition chief whip.