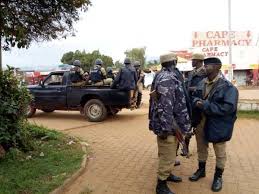 Police has heavily deployed in Kamwokya to deter sporadic protest that would arose following the blocking of Kyadondo East MP Robert Kyagulanyi aka Bobi Wine from travelling abroad for thorough medical treatment.

The bed ridden legislator who is alleged to have been tortured during and after his arrest in Arua mayhem, is currently hospitalized at Kirudu hospital, a facility where he was deferred by security agencies after he was halted from flying for medication.

According to bail condition that were given to the legislator and other suspects who he was arrest with, Gulu high court Judge, Justice Steven Mubiru didn’t blocked him from attaining medical treatment after his layers told court about his health conditions.

Police says they halted the departure of the Kyagulanyi Sentamu at Entebbe International where he due to depart. He was taken to Mulago National Referral Hospital for a medical examination as he alleged torture.

Meanwhile, ailing Mityana Municipality MP Francis Zaake Butebi who is alleged to have escaped from Gulu police cells was also last evening blocked from travelling for medical treatment after police demanded him a clearance letter from CID’s office led by Grace Akullo. He is currently at Kirudu hospital.