Bridge Schools Uganda is set to launch a new campaign dubbed as Girl Super Power that is aimed at prioritizing the need for gender equality in education sector.

Latest UN reports indicate that the number of girls out of school girls at primary level grew from 32 million in 2015 to 34 million in 2016. Girls usually have to overcome multiple hurdles to access the same learning opportunities as boys. Around 16 million girls between ages 6-11 never enter a school as a student. #GirlSuperPower !

According to Morrison Rwakakamba, the Country Director for Bridge Schools Uganda, the campaign focuses on science, technology, engineering and mathematics (STEM) skills for girls. STEM skills are traditionally gendered as ‘male’ subjects in Uganda, however young girls in underprivileged communities are pursuing their dreams of becoming doctors, engineers and mathematicians against the odds.

emphasizing on the 2016 Twaweza report, Rwakakamba says nine out of 10 children in Uganda who were assessed in Primary three, were unable to read and comprehend a Primary two level story and correctly solve Primary two level numeracy tasks up to division level.https://www.bridgeinternationalacademies.com/girlsuperpower/

“Girls in Uganda almost need superpowers to gain a decent education. It is deeply disappointing if the number of girls being failed is on the rise despite ongoing international efforts. We know that when given a chance in the classroom girls excel,” says Rwakakamba.

He adds that despite defying odds and overcome near impossible hurdles to reach the classroom, many girls are aspiring to a better future, “thanks to transformative schools in Uganda. We are working to make that the norm rather than the exception,” he added. 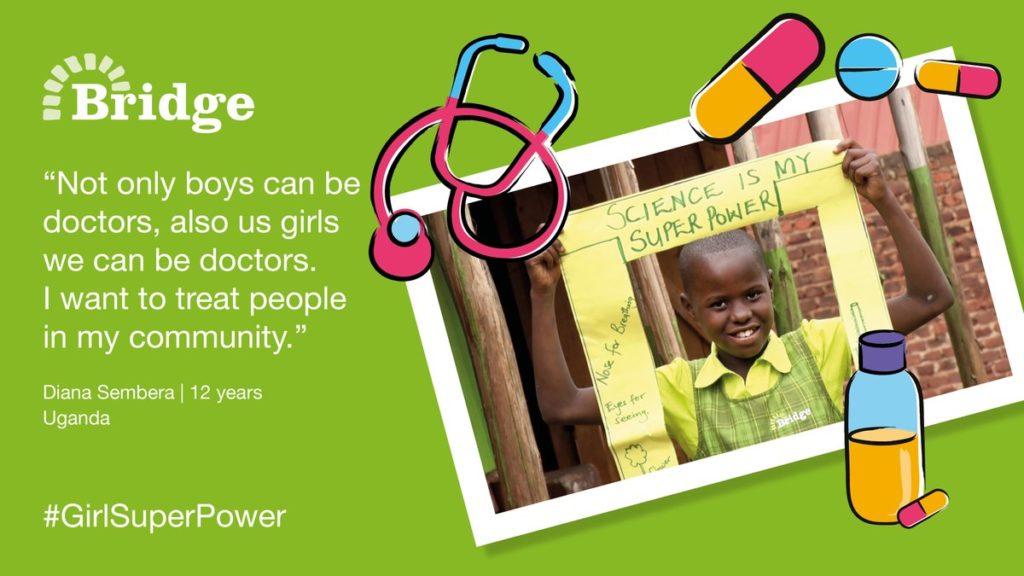 The Ugandan stars of the new campaign highlights that with a good schools, a great teacher and a chance to learn; girls can defy expectations, challenge stereotypes and escape poverty.

A twelve -years-old Diana Sembera who attends Bridge School Nsumbi loves science, it’s her best subject and she knows it will help her thrive in later life. She wants to become a doctor so she can treat sick people in her community.

Creating more opportunities to learn is a challenge that the UN and global leaders are united in tackling, Rwakakamba notes that solving this issue will unlock talents, raise standards of living, boost economies, and even improve health and security.