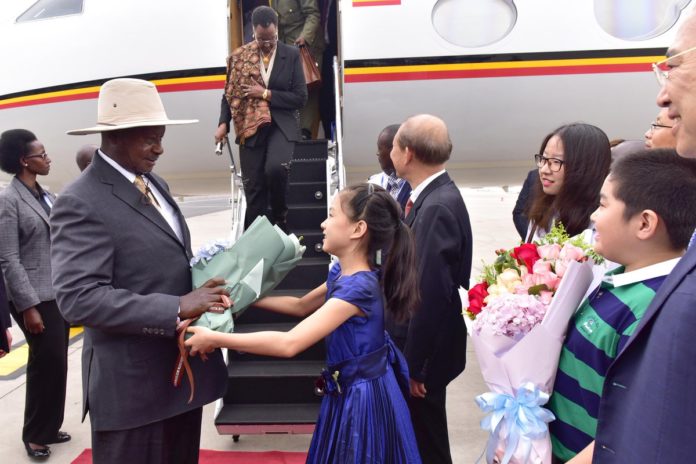 President Yoweri Museveni is set to attend China-Africa Cooperation summit that is aimed at discussing strategic partnership cooperation with China in areas of Trade, Infrastructure as well as Economic Development and Energy among others.

The 3rd Heads of State and Government summit scheduled for September 3-4 brings together leaders from the African continent and China. The first took place in 2006 and was held Beijing, South Africa 2015 and 3rd in Beijing-China.

Museveni who is accompanied by the first lady and Minister of Education and Sports, Janet Museveni who are now in china was received by the Director of the Standing Committee of Beijing Municipal People’s Congress Zhang Qing at Beijing Capital International Airport.

The president is expected to discuss the shared future, further dovetail China’s Belt and Road Initiative with African development and deepen people-to-people exchanges.
He also held bilateral talks with his Kenyan counterpart, President Uhuru Kenyatta who called on him at his residence in Beijing.

In the near future, China-funded industrial projects will cover the entire industrial system, Chinese tech companies will set up numerous development bases in Africa, dozens of jointly-built agricultural demonstration centers will bring huge, historical changes to Africa’s agricultural industry, and more private companies will invest in Africa, especially in the cultural field, among others.