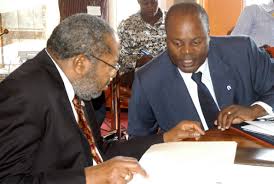 A confidential ‘Special Audit Report of Bank of Uganda on defunct banks’ authored by the Auditor General (AG) upon the request of
Parliament of Uganda reveals many details regarding the closure and sale of seven commercial banks but the most interesting detail by far is BoU’s expenditure of Shs478.8 billion of the taxpayers’ money for liquidity support and other intervention costs as it prepared the sale of Crane Bank Limited (CBL), which it eventually sold to rival Dfcu Bank in January 2017 at Shs200 billion.

The AG, John Muwanga in his report alludes to the fact that the BoU senior managers used the money without following certain guidelines, which brings in question whether BoU bosses that handled the transaction did not involve themselves in corruption, specifically using the taxpayers’ money for their own selfish interests.

For instance, MMAKS Advocates who acted as transaction adviser were paid about Shs914.3 million for legal advice during the intervention, resolution of CBL and advice on the sale of CBL assets and assumption of liabilities. Such expenditure by the BoU top managers was reckless and did not consider the interest of the taxpayers. This transaction was followed by another careless payment of about Shs3.07 billion to the same law firm as 5 per cent commission of the monies recovered from CBL shareholders. One wonders why the same law firm was given the two jobs at such a high cost. One cannot rule out the cases of connivance to defraud taxpayers’ money.

Further, KPMG was paid by BoU for three services whose cost was so expensive to the taxpayers, yet sources say other competent firms could have done one of the assignments at relatively cheaper costs compared to what KPMG offered. Specifically BoU paid KPMG for; information Technology Security Testing and Disaster Recovery Gap Assessment, Provision of Information Technology Technical Support and Provision of IT Technical Support. The services appear to be the same
though BoU paid KPMG about Shs428.9 million, Shs190.5 million and Shs302.3 million respectively for each of the services.
“Following the takeover, BOLI engaged KPN4G to provide IT support to BoU team because BoU IT team did not have a competent and experienced resource with requisite expertise regarding CBL’5 core banking system (T24). The confidentiality of the information could mostly be guaranteed by using an independent resource. It was also difficult to rely on the staff of CBL,” the AG quotes BoU managers he interviewed as they spent about Shs190.5 million on KPMG for the provision of
Information Technology Technical Support. But such explanation,
according to sources is contestable.
Sources further told Eagle Online that three individuals who are likely to be held liable are Deputy Governor, Louis Kasekende, former Executive Director in charge of Supervision, Justine Bagyenda and former Deputy Director for Supervision Benedict Sekabira.

They argue there is more behind these figures and that the public should not believe them. Relatedly about Shs302.3 million spend on “Provision of IT Technical Support” support is confusing as that money should have formed part of “Provision of Information Technology Technical Support”. BoU top managers claim the Shs302.3 million was paid to KPMG as work progressed and that was based on the time required by the individuals assigned to the engagement plus direct out of pocket expenses and VAT.

The BoU top managers further spent about Shs720.4 million as facilitation for the “special exercise (CBL)”. According to sources such an item is confusing and cannot be relied on for purposes of transparency and accountability. BoU managers who handled the transaction will have to shade more light on why they spent that money on that “special exercise” that they cannot name.
BoU also paid auditing firm PwC about Shs345.09 million for compilation of an inventory of assets, liabilities and equity of CBL and an extra about Shs936.5 million for carrying out investigation and forensic review of CBL upon which BoU relied on to sell CBL to Dfcu Bank. BoU top managers are expected to tell the public why they relied on PwC advice to sell off CBL, when an avenue for reviving CBL existed, as heighten in the report.