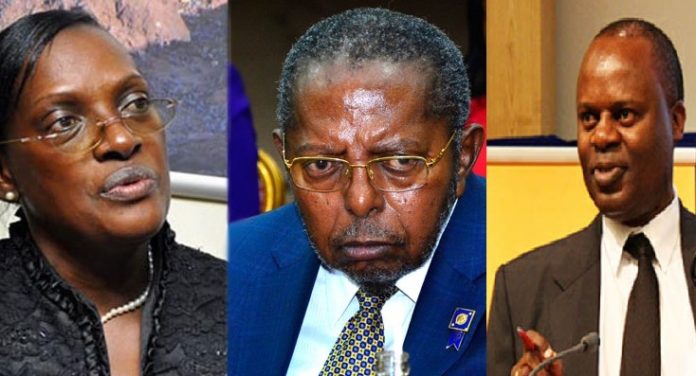 Members of Parliament on Commissions Statutory Authorities and State Enterprises (Cosase) committee headed by Bugweri County legislator, Abdul Katuntu, expect this this month to open an inquiry into the suspected mismanagement of closed commercial banks by the central bank-Bank of Uganda (BoU), a source has said.

The Mps want BOU Governor Prof. Emmanuel Tumusiime-Mutebile and his deputy Dr. Luise Kasekende, among others to testify under oath with regard to the payment of billions of shillings to external lawyers.

For the expenditures on Crane Bank Ltd, only Shs4 billion was disclosed as the money BoU used in hiring of two external law firms. MMAKs (Shs3.9 billion); Cohen and Collins Solicitors and Notaries (Shs17.4 million).BoU sold Crane Bank to Dfcu Bank at only Shs200 billion paid in installments.

However, there is no expenditure revealed on MMAKS Advocates and AF Mpanga Advocates who were hired by BoU in Crane Bank saga before court kicked them out over conflict of interest. It is also not clear how much BoU officials spent on external lawyers who handled Greenland Bank and others.

MPs want Mutebile and his juniors respond to queries under oath because the Auditor General John Muwanga in his August 27 report to Parliament said that some key documents which he could have used in the audit of closed banks were not availed to him by BoU officials.

Mutebile and others will be tasked to provide details on the BoU expenditures on external law firms hired during the liquidation of Teefe Bank (1993), International Credit Bank Ltd (1998), Greenland Bank (1999), The Co-operative Bank (1999), National Bank of Commerce (2012), Global Trust Bank (2014) and the sale of Crane Bank Ltd (CBL) to dfcu (2016).
For instance, under Global Trust Bank, Cosase will ask Mutebile to explain the payment of Shs409.3 million in legal fees.

Before Cosase halted investigations in September last year, the committee had found from previous AG reports that BoU officials paid Shs1.4 billion in legal fees to private law firms, despite having a fully-fledged legal department. The MPs have since queried the expenditure and demanded details.