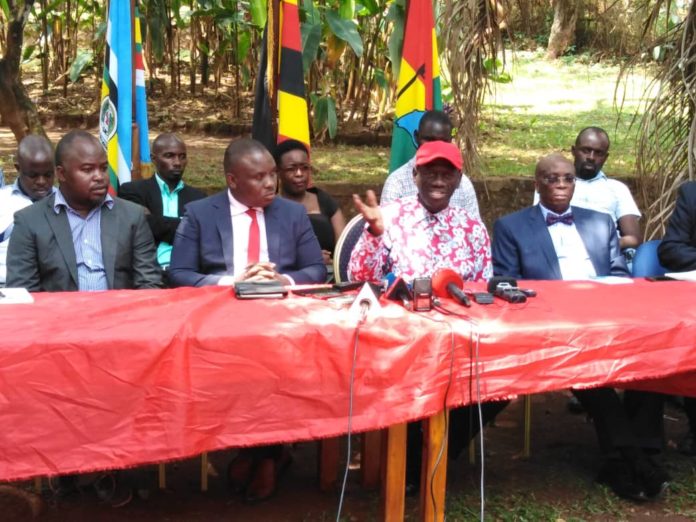 Former presidential candidate Dr. Kiiza Besigye says what was to happen in Arua was to kill Kyadondo East MP Robert Kyagulanyi and later arrest him immediately for the death following their collision as the legislator proceeded for his last rally.

The MP with hundreds of supporters who were in procession a head of their final rally for MP elect (Kassiano Wadri) for Arua Municipality, was seen trying to attract supports who were being addressed by Dr. Besigye.

Speaking about the political, security and economic atmosphere in the country, Besigye said they wanted to use that loophole, but fortunate enough God above is stronger than all evil forces. Besigye said nonetheless, Yassin Kawuma was instead sacrificed.

Kawuma died of gunshots in an operation that was launched to nab political actors who were alleged to have smashed windscreen of president’s vehicle as he traveled to airfield.
“This plan to eliminate political elements has however been done through subtle means like poisoning and indeed most of our colleagues have retired that way,” Besigye said at his Katonga road office.

He emphasized the need for all political actors to come together over the current regime led by president Museveni.
“What is happening now is recruitment of a new force and I think if we had a serious parliament, this is one of the critical areas that ought to be focused on. We have heard a number of MPs raise concerns in parliament. We have heard information on who the targets are.”

He questioned where government will get money to facilitate local leaders unit (LDU) personnel when there is no Shs10, 000 that is meant for the newly elected Local council leaders.
Yesterday, Chief of Defence Forces, Gen. David Muhoozi, said the LDU officers will earn Shs200, 000 monthly salary.